27 Aug The Prisoner and Martl: A Romance, and a Mystery

Every artifact in our collection tells a story. The only problem is—we don’t always know what the full story is.

Such is the case with a fascinating—and touching—German journal and sketchbook in our archive. Little is known of the origins of the item—the donor purchased it on the collector’s market with no provenance to explain how it got to the US.

What we can determine is short on specifics but long on sentiment. The small cloth-covered journal was kept by a German soldier in 1945-1946 while held as a prisoner of war in France. During his incarceration he created the book to present to his beloved Martl, composing heart-felt poems and occasional sketches to keep her close to heart.

The identity of the couple remains a mystery. Martl’s last name was likely Mueller, as indicated on 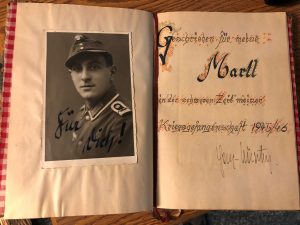 a torn envelope tucked into the journal. But the writer is more difficult to identify. Although he wrote his first name several times in the journal and on the back of photos he sent to his darling, he used an archaic German cursive script that is difficult for the modern reader to decipher. And he never gave his last name—naturally, he and Martl were on a first-name basis.

While we are open to any other suggestions, the soldier’s first name seems to be either Jens-Gunter or Hans-Gunter.

The opening page of the journal reveals the background: “Written for my Martl; in the difficult time of my prisoner-of-war experience, 1945/46.” This isn’t a wartime document—it’s postwar.

Why was Jens-Gunter (if that was his name) still held as a POW even AFTER the end of hostilities? The answer reveals an almost-forgotten chapter of history. During the war and Nazi occupation the French people had suffered greatly; destruction was great, corpses and unexploded mines littered the countryside. Short on labor and needing much work done, the restored French government in 1945 decided to keep German POWs in custody for a while to conduct repairs, clean up rubble, bury the dead, and clear minefields. Most would be repatriated by the end of 1946.

It was hard and often dangerous labor. But the POWs understood that it must be endured as a means to gain release from custody. In one poem written in Dijon and dated March 12, 1946, our prisoner/poet admitted as much: “Work itself is secondary; just pretend; only as a sham…work here, work there—all that is important is the transfer home!” 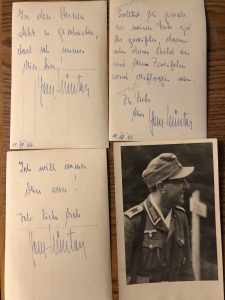 The poet earlier in the war, with some of the inscriptions on the back of other photos.

Most of the poems (some labeled musically, such as “Foxtrot” or Waltz”) are unabashedly sentimental. One written from Marseilles accompanies a self-portrait of a dejected “PW” behind barbed wire, dreaming of the day he left Martl—and of the day he’ll again return. “Once I said farewell to you. In your eyes tears were standing; just like mine…in my heart I carry your picture. It accompanies me in struggle and danger, it helps me overcome much danger. Fate often goes its own way. Who could guess that I would not return? The day was hot, the battle raged wildly and hit me with bitter imprisonment…Outside the spring is already approaching, but around me, only barbed wire. Oh home, home, why do you lie so far away?”

It’s impossible to know the end of the story. Obviously the journal survived and photos taken earlier in the war were tucked inside. This suggests the couple were reunified and his gift of love presented to Martl. Perhaps they married and lived happily ever after. Perhaps there was an entirely different ending. Perhaps some day further research will reveal the truth.

But for now, we are left only with tantalizing glimpses of a wartime romance. If nothing else, it is another reminder that the Second World War was an event that impacted the fates of real-life, flesh-and-blood people—including two unknown lovers in Germany, separated by the tides of war.