17 Oct How Postcards Helped to Win the War

June 1940: The British Expeditionary Force, as much as could be saved, and the remnants of the French Army, have been successfully evacuated from Dunkirk. Some would even say miraculously evacuated. It means that Britain will live to fight another day. But that raises a crucial question: how and where will they fight Nazi Germany? How exactly can they win the war?

From Prime Minister Winston Churchill down to the lowliest private, it was clear that most promising path to victory would be found by crossing the Channel—un-Dunkirking themselves. It wouldn’t be done quickly, but it would have to be done.

Plans for a Cross-Channel Invasion—the early visions of what would become Operation Overlord by 1944—were in the works even before the United States entered the war. Once Britain had American allies, planning took on new dimensions. But there were many question marks.

British war plans for years had ignored coastal France. France was their closest ally; invading them was so remote an eventuality that no one had considered it since Napoleon. If war happened, the British forces would cross the Channel and move to the Franco-German border, as it indeed did in 1914 and 1939. Fighting on the Channel beaches had never been envisioned. Military planners lacked vital data on such subjects as the firmness of beach sands to support tanks or adequate topography maps. British commanders had to plan an invasion into terra incognito.

Along the way, someone hit on the idea that crucial information might be found in albums and desk drawers all across England. The Channel coast of France had been a popular vacation spot for Brits on holiday for many years. The Upper Classes would summer in exclusive Norman villas; but even the middle classes could afford the occasional trip to resorts across the Channel. The region around what would be codenamed Gold Beach was especially popular. 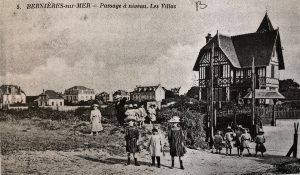 The distinctive-looking villa on the right, along what becomes Juno Beach, was an important landmark for Canadian soldiers.

And so in March 1942 an appeal was made over BBC radio for civilians to comb their attics and keepsake drawers for any postcards, photographs, tourist brochures, regional maps, or even Michelin travel guides that covered the Channel coast of France. The response was immediate and overwhelming. Patriotic Brits who were eager to support the war effort however they could flooded the War Office with postcards. Within three days, 30,000 had been received; by the time the invasion actually commenced that number would exceed ten million.

The vast, vast majority of them were useless to the War Office. Piles of them that were duplicates or which revealed no relevant information were discarded. But others proved to be exactly what was needed. How far out did low tide go at this stretch of beach? How high were the bluffs above that section? How far was it from that hotel to the roadway rising from the shore? Chance are there was a postcard that revealed the answer.

An organization called COSSAC (Chief of Staff, Supreme Allied Commander) was formed in March 1943 to begin to solidify plans for a cross-channel invasion. British General Frederick Morgan was the designated Chief of Staff, even though no Supreme Commander had yet been appointed for him to advise. Morgan’s planners made good use of the more informative postcards, especially those revealing tidal conditions, showing landscape details, or capturing prominent landmarks that could be used by the invaders to orient themselves. Many were featured in pre-invasion briefing books and recognition guides, or were used in designing three-dimensional models of the coastline for training purposes. 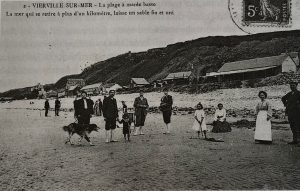 This postcard revealed details about the bluffs above Omaha Beach to planners.

When US General Dwight Eisenhower was appointed Supreme Allied Commander and the plans for Operation Overlord were finalized, the info gleaned from thousands of postcards was a vital ingredient. Many soldiers knew exactly what to expect and where they were to land because they’d seen it in a postcard.

It can certainly be argued that victory or defeat would be decided by many other factors than just tourists’ old postcards. But it should also be remembered that the unexpected source of data made a difference, and arguably saved a few lives along the way.