It often comes as a surprise to visitors to the National D-Day Memorial when we mention the US Coast Guard’s involvement on D-Day. Everyone knows the army and navy were there, and that there were pilots and aircrew flying overhead. But the Coast Guard? Didn’t they stay closer to American territorial waters during the war?

Certainly the USCG played a valiant and crucial role in the waters off of the US, but it’s also an historical fact that coastguardsmen were to be found in any combat zone where the Navy was (albeit in smaller numbers). Normandy was no different. Men from the USCG served individually on naval and merchant marine vessels supporting the invasion, and also crewed several of their own craft, including five attack transports, eleven Landing Ships Tank, and twenty-four Landing Crafts Infantry. Many of the smaller Higgins Boats taking men to the beaches on June 6, 1944 were manned by coastguardsmen. It’s also worth noting that perhaps the best known photograph of D-Day was taken by a Coast Guard photographer. Officially titled “Taxis to Hell – and Back – Into the Jaws of Death,” this iconic image was captured by chief photographer’s mate Robert F. Sargent off of Omaha Beach. 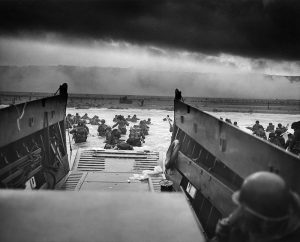 Into the Jaws of Death–the iconic photo taken by a Coast Guard photographer.

There is much else to the role of the Coast Guard on D-Day. Some items recently donated to the National D-Day Memorial’s collection help to highlight a forgotten—but vital—component of the invasion: the heroic Matchbox Fleet. 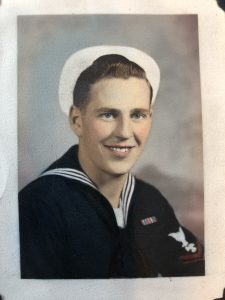 Carl Packer was a coastie who served aboard Coast Guard Cutter Number 57 in the English Channel in June 1944. That small vessel (originally designated 83512) was one of sixty 83-foot wooden cutters that comprised Rescue Flotilla One, deployed in support of the Normandy invasion. The armada of fragile wooden vessels with underpowered gasoline engines was unofficially dubbed the “Matchbox Fleet.”

The Matchbox Fleet operated all along the invasion zone with the assignment of rescuing downed airmen or any personnel from landing craft stranded in the channel. By the end of Operation Neptune, Rescue Flotilla One had been credited with saving more than 1400 soldiers, sailors and airmen from the treacherous waters of the English Channel. Its service became a model for similar operations in the Pacific War. While the Matchbox Fleet is hardly a household name today, for those hundreds of desperate men it represented the difference between life and death.

Packer’s collection includes impressive (if tiny) photos of Cutter #57 in England and in the Channel, as well as personal mementoes. It’s clear that he was immensely proud of his service and of the success of his Matchbox Fleet. Curating this collection is one of many ways the National D-Day Memorial pays tribute to the heroes of Overlord. 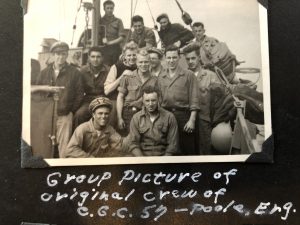 The crew of Coast Guard Cutter 57 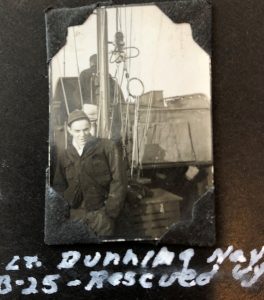 One of the fliers rescued by the Matchbox Fleet from the Channel–one of many.

The role of the Matchbox Fleet and the rest of the Coast Guard in the Normandy invasion will be permanently recognized on Veteran’s Day 2019 when a fitting brass plaque is unveiled. Sponsored by Vietnam veteran Capt. T. E. Deming, the plaque closes with these fitting words: “For more than two centuries the Coast Guard has ably served the nation, protected our national interests, and assisted those in need at sea. Never was the Coast Guard motto “Semper Paratus” (Always Ready) more impressively demonstrated than in the English Channel and along the Normandy coastline in 1944.”