The USS Osprey: a D-1 Sacrifice

Who were the first Allied fatalities in the Normandy Invasion? Some would immediately picture paratroopers (perhaps specifically even mention British Lieutenant Den Brotheridge). Others may claim an air crew knocked from the sky in the early hours of June 6th. 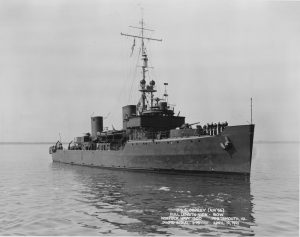 But in fact, the first men lost as part of Operation Overlord were sailors aboard a little-known vessel in the Channel, the USS Osprey (AM–56). Even the most dedicated World War II buff may not know the story of the Osprey, but it’s one we should never forget.

The Osprey was a Raven-class minesweeper built at Virginia’s Norfolk Navy Yard and commissioned in 1940. Her job was simple but far from easy: to clear any waters through which forces had to pass of enemy mines. It was, as you can imagine, a difficult and dangerous job, and one with incredibly high stakes. For the Normandy invasion, everything hinged on getting a critical number of forces onto the beaches. If too few Allies got ashore due to the thousands of mines Germany had sown, winning the war became a much more difficult proposition. No wonder the motto of WWII minesweepers was “Where the fleet goes, we’ve been.”

After service in the Caribbean and North African waters, by 1944 Osprey was assigned to the minesweeping flotilla clearing the Channel prior to D-Day. About 5:00 PM on June 5, the vessel ran into a magnetic mine off of the coast of the Isle of Wight. The explosion occurred near the storage lockers for the ship’s ammunition, which magnified the damage. Heroic effort by the crew extinguished the resulting fires, but could not stop the flooding. They abandoned ship, leaving behind six crewmen, almost certainly killed in the initial blast. Their bodies were never recovered.

These six men are considered the first Allied forces to die in the invasion, perishing on June 5, 1944. Because our Necrology Wall at the National D-Day Memorial records only the names of those KIA on June 6, these pre-D-Day deaths are not represented. But to pay due tribute to these six heroes and to see that their memory does not fade away, here are the names of six sailors who gave their lives to ensure that the great invasion the next day would succeed:

Joseph Vanasky, one of the men lost aboard the Osprey.

The USS Osprey and her D-Day story has been back in the news in recent months. This past summer, in time for the 75th Anniversary of D-Day, photos of the ship’s bell from the Osprey 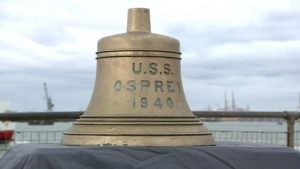 The recently recovered ship’s bell from the Osprey.

began to appear in various British social media. While the location of the wreck is known and it’s frequently used as a dive site, no permission had been given to salvage any parts of the Osprey, and so possession of this bell was illegal. Apparently realizing this, whoever had the bell turned it over anonymously to British officials and then to the US Navy. The current plan is to display the bell at the American Embassy in London.

The story of D-Day is made up of thousands of smaller stories, all contributing to a fuller understanding of one of the most momentous events in history. The sacrifice of the valiant minesweeper Osprey and six of her crew is but one of these stories.