“Lest You Forget:” A Battle of the Bulge Tribute

06 Jan “Lest You Forget:” A Battle of the Bulge Tribute

Seventy-five years ago, American boys were still fighting the hellish Battle of the Bulge. Beginning with surprise attacks along Allied lines which caught our forces entirely off guard, the German forces made rapid advances to knock a “bulge” in the front. The battle was marked by bitterly cold weather, fierce fighting, and German atrocities such as the infamous Malmedy massacre.

American losses in the frozen fields of Belgium and Luxembourg were especially poignant, given that many of the men had been in the front lines for months and had been expecting the war to end in short order. One of those men killed in the Battle of the Bulge was Andre Poitevin Fallwell. As a tribute to all of those who gave their lives three-quarters of a century ago, we’ll tell you his story—or rather, let his eloquent words tell his own story.

Andre Fallwell was born in January 1924 in France. He and his family migrated to the United States in 1929 and settled in Roanoke, Virginia, where he grew up and graduated from Jefferson High School, an aspiring writer who edited the school newspaper. Afterwards he enrolled at the Virginia Military Academy, but like many cadets was eager to get into the fight. Andre joined the army and was posted to the 11th Infantry Regiment, 5th Division and was sent to France.

In October 1944, Fallwell penned the poem below to express his hopes that the sacrifices of so many men to end Nazi tyranny would not be forgotten. Little did he know he would be one of these in a matter of weeks. On Christmas Day, Fallwell was killed in battle in Luxembourg as part of the Battle of the Bulge.

A month and a day later, as his family received word of his death and prepared to old memorial services, his hometown newspaper published his poem. Thirty-seven years later, the poem was chosen to grace the new Roanoke War Memorial, where it can still be read by visitors to the beautiful spot. 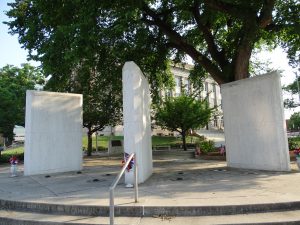 Lest you forget —
We piled into assault boats bobbing high,
And charged the beach amid the thundering roar,
Meanwhile the winds and dismal rain whipped by
To watch us die
On Europe’s battered, bleeding shore!
We fought our way to land;
We left there in the sand
Our native blood. Although the sea
Will drench it clean, we claim our hand
Released the forces soon to free
Old Europe’s battered bleeding shore!

On, comrades, on! We stay behind —
The peace is yours to win.
The fight claims us, but you will find
Us here for all eternity;
As though we hadn’t been
The price for our posterity —
Do you remember when?

Lest you forget —
Our fight is over now, and it is won;
But we are not alive to share the goal
Of glory, Only see that all your sons
Recall our guns —
Before the drums have ceased to roll!

Our standards lie amuck
Where last we falling stuck
Them waving proud. Although the next
Will take it up, we claim our pluck
Has written freedom’s newest text —
Before the drums have ceased to roll!

On, comrades, on! We stay behind —
The peace is yours to win
The fight claims us, but you will find
Us here for all eternity;
As though we hadn’t been
The price for your posterity —
Do you remember when?
And after war deserts our kind,
Will you remember when?

In memory of Andre and the thousands of others who gave their lives in the Battle of the Bulge, reminding us that the peace is still ours to win.