28 Jan New Artifacts Tell the Story of an Old Soldier

The collection of the National D-Day Memorial is admittedly very 29th-Division heavy. Located in Bedford, where Company A of the 116th Regiment, 29th Division mustered, and founded by Roanoker Bob Slaughter, another 29er, it stands to reason that a large proportion of our artifacts would reflect the Blue and Gray Division.

So we are always pleased when pieces of history show up that allows us to tell the story D-Day from other perspectives. Such was the case recently when a longtime supporter and friend of the Memorial donated a collection of items associated with the legendary General Clarence Huebner. Huebner is not a household name to many Americans. But perhaps he should be. 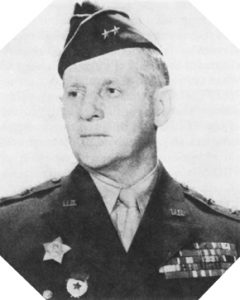 Born 1888 in Bushton, Kansas, Huebner enlisted in the US Army prior to World War I as a private. An excellent soldier, he was a sergeant by the time the US entered the Great War. On the battlefields of Europe, Huebner excelled, rising through the ranks and distinguishing himself in the 18th Infantry Regiment of the First Division—the Big Red One. Over the course of the war he commanded a company, a battalion, and finally the regiment; in combat at Soissons, Saint-Mihiel and the Meuse-Argonne sector he became one the nation’s most decorated soldiers. By the time the war ended, he had received a Silver Star, a Distinguished Service Medal, and no less than two Distinguished Service Crosses—second only to the Medal of Honor.

After the war Huebner remained in the Army helping to train officers of the peacetime military at Fort Leavenworth. Of course, the hero of WWI found himself in another World War in 1941. By 1943, he was a general and was selected by Omar Bradley to take command of the battle-hardened (but undisciplined) Big Red One. His job: whip the division into shape to take part in the coming Cross-Channel Invasion.

And he did. While his martinet rigidity earned him some resentment early on from Big Red One soldiers (some of whom had already been in combat in North Africa, Sicily, and Italy), over time they grew to appreciate his leadership and came to look on him as their “Coach.”

Finally the day came to send his beloved Division into France. While protocol prevented the indomitable Huebner from landing (as he desired) with the first wave of soldiers at Omaha Beach, he arrived in France on the evening of June 6, 1944, one of the highest-ranking American officers to land on D-Day. 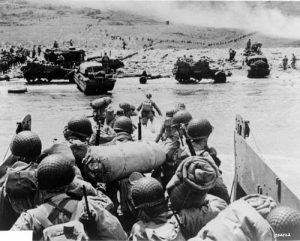 The First Division went on to fight at Mortain, Aachen, and the Huertgen Forest. In January 1945, Clarence Huebner took command of the V Corps, leading his men from the Rhine to the Elbe Rivers by the end of the war. After VE Day, he was appointed to various upper-echelon posts, culminating in a stint as military governor of the American sector in Germany. The old soldier retired from the Army in 1950. He lived in retirement until 1972, and is fittingly buried at Arlington National Cemetery. While the name of Clarence Huebner is not as well known as it should be, few other men had such an unsung impact on America’s victory in World War II and on the early years of the Cold War.

Now back to the recent donation to the National D-Day Memorial. Not long ago, Art Beltrone, a Marine Corps veteran, dealer in WWII memorabilia, antique appraiser, and supporter of NDDM for many years, offered to donate some items of Huebner’s to our collection, after learning that the we had too few artifacts from the 1st. Beltrone had helped Huebner’s survivors appraise the General’s mementoes of his long career, and had acquired a few pieces from the estate. He decided that the best place for these items to permanently reside was the D-Day Memorial. While the pieces are from the postwar period, they are still fascinating artifacts which belonged to a crucial D-Day hero.

The most notable piece in the collection is an original portrait of Huebner, rendered by an artist identified only as “Rollie.” Showing the General with three stars (hence after 1947), the stirring image reveals the intrepid character of the man. 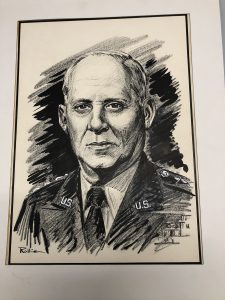 Portrait of General Clarence Huebner, now part of the collection of the National D-Day Memorial.

In addition, two postwar scrapbooks were included in the donation. The first is a memento of a visit Huebner paid to Erding Air Depot in Germany in 1949. His visit was part of a massive effort of American service personnel to raise money for the March of Dimes and the fight against polio—Erding had raised more money per man than any other American installation in Europe. The depot presented him with the scrapbook detailing the history of the base in fascinating photos. Originally a wartime German air base, it has been bombed by the Allies and then rebuilt by the US in the occupation period. One intriguing photo shows the ruins of a hangar, circa 1945, with the wreck of a German ME-262 jet evident. Other photos show the construction of the US Air Force base and everyday life of the men and women stationed there: baseball, basketball, and bowling teams, for instance. It is truly a fascinating and highly significant historical record. 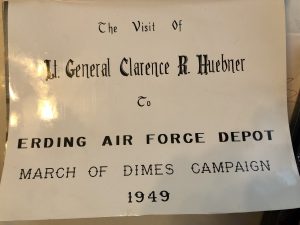 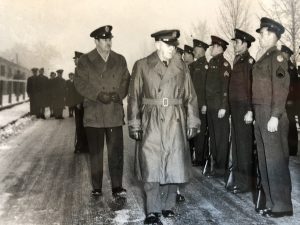 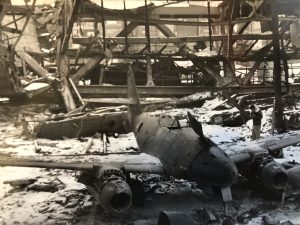 The ruins of a hangar at Erding Air Force Depot, with the hulk of a German ME-262 jet. 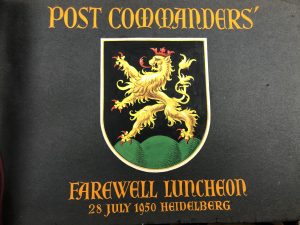 The second scrapbook was presented to Huebner by fellow officers in Germany at a farewell luncheon in Heidelberg on July 28, 1950. It includes dozens of autographed photos by various post commanders in occupied Germany. One of the more relevant to the D-Day Memorial shows General Charles Canham, who signed it “To a great soldier with real admiration, Chuck Canham.” Six years earlier, then colonel Canham had landed on Omaha Beach not far from Huebner, in command of the 116th Regiment of the 29th Division.

(The National D-Day Memorial also has in its collection some personal items of Canham, including his medal set reflecting his long career in the army). 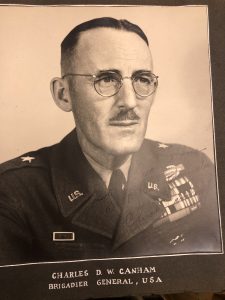 These items will be used by the Memorial to help tell the story of Huebner and the intrepid First Division on D-Day, and will be available to researchers delving into the history of the immediate postwar years. They will also help to keep alive the memory of a man who entered the army as a private and left it a Lieutenant General; a man whose military leadership helped the US win two world wars. It’s a story we are eager to tell.

We’ll give the last word to Huebner himself, through historian John McManus. In his excellent history “The Dead and Those About to Die,” McManus paid a much-deserved tribute to General Huebner and his men of the First Division. He closed out chapter 9 of the book with this moving passage honoring the men on the beach on D-Day, and the “Coach” who commanded them:

“In [Huebner’s] view, a commander had to be near the action to truly understand what was happening, control his soldiers, and make good decisions. As the hours passed, and the general talked with more soldiers, he developed a full understanding of just how bitter the struggle had been for his men on D-Day and how well they performed. ‘Battles are won by small units and we had those small units on the beach,’ he later reflected…

Somehow, even though General Huebner had not been directly alongside his soldiers during their greatest hours of peril, he could feel that something had changed in his relationship with the proud, headstrong men of the Big Red One. As he looked into their eyes and conversed with them, he sensed a deepening feeling of mutual respect and confidence. The old soldier, the ‘Coach,’ the man who had experienced more hours of combat service than he could ever count, was profoundly impressed with the resourcefulness of his men and their inner toughness…General Huebner was deeply moved. Tears welled up in his eyes and he could hardly speak. ‘You did it,’ he managed to utter with admiration in his voice. ‘You did it.’”