06 Feb A Mysterious Letter from “Somewhere in France”

A letter recently donated to the National D-Day Memorial gives a fascinating glimpse into the events of D-Day and the weeks following. But the letter leaves quite a few mysteries unresolved—such as who wrote it, and to whom.

Dated July 4, 1944 from “Somewhere in France,” the letter uses only nicknames to identify writer and reader. The author signed his name “Foxy” and addressed it to “Bunney.” Bunney was obviously Foxy’s wife or girlfriend, and it appears that after the letter was sent (likely in V-Mail form) to the US, someone named Grace—which may be Bunney’s real name—typed a transcript to share with others. One recipient of the transcription in 1944 was young Marguerite Gregg. The original letter was found recently in her papers by a nephew, who, recognizing the historical value, donated it to the Memorial’s archives.

The identity of “Foxy” will likely remain a mystery, but mention of some officers may help put the letter in proper context. The mention of “Capt. [Donald] Brown” and “Lt. Col. [Robert] Ballard” indicates that the writer was likely a member of E Company, 501st Parachute Infantry Regiment, 101st Airborne Division. He may well have been an officer, as he mentions writing medal citations “for my men.” The identities of MacGregor and Bill Morgan remain elusive.

The letter is transcribed below, with only some minor changes to the paragraph breaks and corrections of obvious typos. His descriptions of and attitudes toward the enemy—potentially offensive to modern readers—were left as he wrote them for the sake of historical accuracy. Note, among other things, the paratrooper’s descriptions of the French landscape; his appreciation of American armored and glider forces; and, interestingly, his early use of the term “rock and roll.”

Another American Holiday and I find myself still 3000 long miles away from you. These miles are exceedingly long because there’s nothing right now that can bridge them as far as we are concerned. Wars are horrible things, but I thank God that this war is here and not back where you are. That alone makes the 3000 miles seem maybe not so long.

I’ve passed through a lot of villages both in the attack and then returning from the front lines. The miserably torn and shattered buildings, the little kids with fear all over their dirty faces asking for chocolate. The Jerries aren’t so tough except when the odds are heavily in their favor, and it gives us all great pleasure in knocking them off.

Among the first prisoners we took, we found an ugly little Jap. We couldn’t understand—Japs in the German army. By interrogation we found out that they were used by the Germans as “sniping instructors.” You can’t see them and they were everywhere but like the Japs they can’t shoot very straight. Capt. Brown and I were looking at a map during one of those horrible nights when we were so badly out-numbered. We had to use a light so we covered it with everything we had, which was little, then turned on the light. A couple of seconds later “Zing” the bullet passed between us and we weren’t more than twelve inches apart. It’s buried in the block back of our heads. Damn—that was close.

Another time I was standing behind a wall looking through a hole. I decided I’ve been there long enough so I moved to another place. I had no sooner stepped back then “Zing” right through the hole in into the house behind me. Sometimes you never hear the rifle the enemy has because of silencers and flash-hiders. They are treacherous as the day is long, but can yell “Kamerade!” so well when we close in on them. 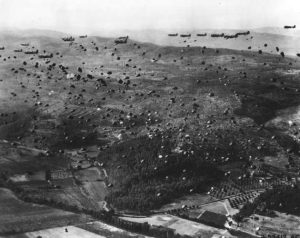 I’ll never forget that first night. As you know we landed here about six hours ahead of the beach landings. As our planes came over the French coast the flak started. A fireworks demonstration was never prettier than what they threw at us. By the time we reached the DZ [drop zone] the area was completely lighted up by the flares, tracers, and burning flak. Our plane was hit in several places but the pilot held her steady as he could, but the bursting flak shells made it rock and roll so badly that as I jumped I was head over heels.

I landed in a marsh in water about a foot deep. I tried to go in the direction our assembly area was, but Jerry had other ideas. Then along comes a mortar shell and I hit the water. It landed about 20 yards away showering me with mud and water – but what the hell I was already soaked. Then I found Bill Morgan and Capt. Brown. I had a few men with me and each of them did also so we started out together dodging mortar shells and trying to dodge the machine guns that seemed everywhere. The place was full of irrigation ditches and damn they were deep—all neck deep anyway. We crossed it seemed a thousand then daylight caught us.

The Jerry‘s had stopped throwing flares and flack but the mortar and machine guns kept it up. The Capt. decided to stop, dig in, and send out a patrol to locate the rest of the battalion. I volunteered for the patrol, took two men and took off. About mid-morning I found the battalion and sent back the two men to the Company. Only one got through to the company and led it back to where Lt. Col. Ballard was with the 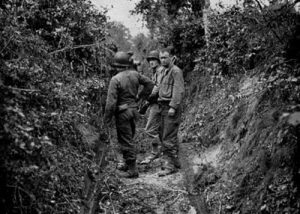 battalion slugging it out with the Jerry’s. For two days and nights we fought and pushed Jerry back hedgerow by hedgerow until we didn’t have enough to knock him or his well-fortified hill. Then the tanks came, oh what a sweet chunk of iron those tanks were. Then we made Jerry really scat.

We killed plenty, too. I shot one about 5 feet from the end of my carbine. He was a machine gunner about 16 I suppose, and as fanatical as a Nazi can get. Some glider troops came in later and really did a beautiful job of helping us. Great boys—the glider boys!

From then on things were more organized and we fought more along lines rather than from all sides. The Jerry’s hate and fear us because our men and the glider boys really kicked them around. We took a lot of kicks too but we gave them ten for everyone we took. They’ll never be successful against us. They drink like fishes—whiskey, wine, cider and what have you. Stink like hell both dead and alive. It doesn’t take long to learn Jerry‘s game and then beat him at it. In 25 days we learned a lot, some the hard way, but with the consolation that Jerry paid quadruple the price we did.

Now after a couple of hard battles, the first couple or three days I know Jerry pretty well but not too well. Guess we’ll never know what makes the _______ tick. I’ll try to write more later. Right now I am pretty busy writing up silver stars, bronze stars, citations, etc. for my men.

McGregor sends his regards. I have just finished writing up his recommendation for a medal. Hope he gets it. Splendid job. Bill Morgan is still OK and wanting to get back to see Atterclaire as badly as I want to get back to see you, and that’s pretty bad.

God bless you, my angel— Foxy

The typist added this note at the end: This letter was received on July 17 and [is] just about the complete account except for a few items of no interest. Grace