Chances are, wherever you are as you read this in the spring of 2020, you’re under some degree of restrictions to keep the Covid-19 virus in check. Many people have noted that these are unprecedented times in our history, and they are right. But of course we aren’t the first people who have been told to stay isolated for our own safety. In WWII, the citizens of southern England had to endure blackouts.

Especially in the summer and fall of 1940, German air raids over London and other English cities forced the citizens to take shelter in basements or the tunnels of the Underground. Even when there were no German planes overhead, people were told to stay indoors at night, with exterior lights off and windows covered. While people willingly complied, understanding what was at stake, it didn’t take long for blackouts to become tedious tests of endurance. Families with children especially had to find ways to keep occupied during blackouts. 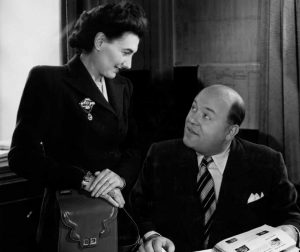 Enter “Evelyn August,” the penname for Sydney and Muriel Box of Kent, a couple who had collaborated on numerous plays, children’s books, film scripts, and short stories. In the fall of 1939, before German air raids started in force but when blackout restrictions were beginning to go into effect in England, the two published “The Black-Out Book: 500 Family Games and Puzzles for Wartime Entertainment.”

The book became an immediate sensation as families looked for just such pastimes to wile away the darkened hours of isolation. Eighty years later, the book is still available in reprints. We’re happy to share a few of the activities here for those of you enduring the blackouts of “social distancing.”

“The Black-Out Book” offered jokes, trivia, riddles, word puzzles, math challenges, craft projects, quotes from famous authors, simple magic tricks, picture puzzles and more. Cartoons appeared here and there, drawn by an artist identified only as “Woods.” Many of the activities may seem quaint or corny to modern readers, and the distinctively British vocabulary exotic to Americans. But for a generation experiencing the stress of war in the skies above them, “The Black-Out Book” was just what the doctor ordered to occupy the mind. 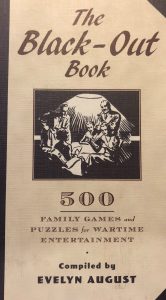 Logic puzzles were a common entry. An example: “Two Air-Raid Wardens sat in their report post one dark night. One Air-Raid Warden was the father of the other Air-Raid Warden’s son. What relation were they to each other?” (Answer: husband and wife) Elsewhere, the reader was challenged to make pictures by laying out wooden matches: “Don’t waste matches in a black-out! Make them do two jobs: give you light and give you amusement when you have half an hour to spare!” Alternatively, matches could be used for simple puzzle challenges. 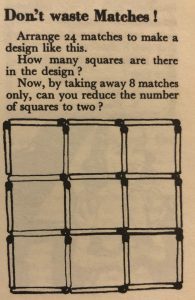 Matchstick puzzle from “The Black-Out Book” 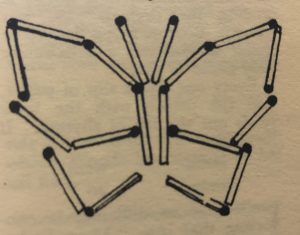 One of the matchstick challenges.

Since the city lights were off at night, some urban dwellers were astounded at the sight of the night skies, suddenly brilliant in contrast—at least in those times they could safely go into their yards or up on a roof, and when the famous London fogs were not in force. So one feature throughout the book was “You Can’t Black Out the Stars!” Evelyn August pictured constellations and challenged readers to find them in the night sky. 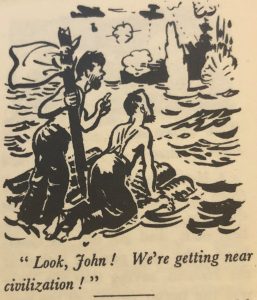 One deceptively simple challenge asked kids to break out a chessboard and eight of the pawns. The goal was to place the eight pieces on the board in such a way that no two were on the same line together, horizontally, vertically, or diagonally. “There are several solutions, but none of them is easy to find!” the authors warned.

Some activities put logic and math to task: “Three consecutive numbers below ten when added together produce a total equal to the square of the smallest number, less the amount of the largest.”

Another simple activity was a game of smarts and strategy called “Spelling a Square.” It could be played with any number of players and even in a bomb shelter, as long as there was a candle or other light source. Each player drew a six-by-six grid on a piece of paper, and then took turns calling out a letter of the alphabet. Everyone then put that letter on his or her grid wherever he or she chose. At the end of 36 turns, the winner was the player who could find the highest number of intelligible words in the completed grid. The group could play as many rounds as they liked, or until the “all-clear” signal was given.

Eventually, the threat of German air raids diminished, and when the war ended blackout tedium became only a distant memory. Few people recall “The Black-Out Book” today. We, of course, have many more ways to entertain ourselves in quarantine. But for a change of pace one night, turn off the screens and spend a night with simpler pleasures and low-tech activities like the Brits did during blackouts. You might find it a fun evening, and at least no German planes will threaten to interrupt the fun.