Chances are you’ve been pondering an important question lately: do you need to wear a mask? When is the appropriate time to wear it? Maybe you’ve worn one to the grocery store. Maybe you’ve decided not to. Maybe your job requires you to cover your face for your protection and that of others.

In 1944, for soldiers training for the invasion of Normandy, they had no such choice. They were required to have their mask with them, and to be prepared to wear it if necessary. Not flimsy gauze masks to contain sneezes. These were gas masks, and they were considered absolutely essential—perhaps—for victory.

The rationale behind issuing gas masks went back to the First World War. On the battlefields of Europe in the last half of that conflict, poison gas weapons were used by both sides to devastating effect. While their military efficacy was debated, few things were more feared than gas attacks. The cumbersome masks used in WWI provided imperfect protection at best.

By 1944, neither side had used poison gas as a battlefield weapon in the European Theater. But the impending cross-channel invasion could change that, Allied commanders believed. Hitler didn’t know where or when we would invade France, but he knew we were eventually coming. What if the German plan to halt the invasion was to launch poison gas shells at the landing beaches? 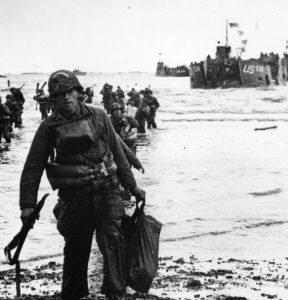 A soldier wades ashore with his gas mask under his chin.

It was considered by some not only possible, but likely. One coastguardsman noted after a pre-invasion briefing that the possibility of the Germans using gas was “three to one.”

No one could know for sure, but the risk was deemed too great to ignore. Accordingly, plans were made for every allied soldier and sailor hitting the beach, or paratroopers dropping into France, to be issued gas masks. 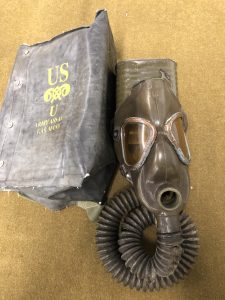 Enormous thought went into this issue. The gas masks issued for the invasion had to be effective, easy to use, light-weight, and waterproof. The result was a redesigned gas mask, issued to American forces in a special rubberized bag. Obviously, in the event of a gas attack, the men couldn’t take time to fumble through cumbersome packs trying to find their masks. So the kit was designed to be carried right up front on the invading soldier, on his chest.

In addition, most of the men were issued a gas brassard sleeve, made of chemically-treated paper designed to turn color if gas were detected. Finally, since some gas weapons could burn skin on contact, D-Day forces were issued uniforms impregnated with gas-resistant chemicals.
These uniforms, really just the normal clothing soaked in a shellac-like substance, proved enormously unpopular. They were stiff, did not breathe well, and smelled abominably. The aroma was often likened to sour milk, and the uniforms were quickly dubbed “skunk suits” by many American boys. Needless to say, wearing them for weeks without a shower did not improve the situation.

To make matters worse, all of these preparations proved wholly unnecessary. The German defenses were formidable, but did not include gas weapons. The only recorded times of gas masks being used on D-Day involved grass fires caused by artillery, not poison gas. And yet the anti-gas measures were considered necessary based on what was known—and not known—in advance.

The men were quick to size up what they needed to carry after D-Day, and the gas masks were some of the equipment most quickly discarded. Piles of them were found on the beaches and just beyond. The waterproof bags were sometimes retained for other equipment, but the bulky superfluous masks quickly became part of the detritus of war.