The National D-Day Memorial is getting ready for camp—with a few differences. For years we’ve offered summer day camps for kids who are interested in the history of WWII, and we’ve always gotten a great response. This year, of course, Covid-19 has changed everything. Camp will be virtual, a “camp in a box,” where kids at home will learn about espionage, undercover agents, codebreaking, and other secret intelligence work during the war.

(While we’ll miss having the kids onsite, we’re pleased to report that virtual camping has expanded our outreach. While most day-campers have always come from less than an hour away, this year we’ve seen families from all over Virginia and several other states sign up!)

In honor of Spy Camp, we’ll take the opportunity to tell the story of one particular agent. Major William Martin of the British Royal Marines was in some ways the perfect spy. He could never be interrogated, although his whole mission was to be captured. Allied commanders could count on him to tell the enemy exactly what we wanted them to know, but not to spill any other secrets. He would not expect any reinforcements, a rescue attempt, and had no fear of death. In fact, his handlers had perfect assurance that the Germans couldn’t kill Major Martin even if they wanted to.

What made William Martin such a perfect spy? It was because he was already dead.

It was 1943. The Allies had achieved a great victory in North Africa, and were eager to press their advantage. The ultimate goal—an invasion into France across the English Channel—had to wait at least another year. So the planning for 1943 envisioned an attack on several Mediterranean targets. Sicily, Greece, Corsica, the Balkans were all considered. But Sicily seemed to promise the best option.

Naturally, it was to our advantage to keep the planned invasion of Sicily a secret. If the Germans knew that that was the target, they would build up their defenses appropriately. Conversely, if the Allies could make the Germans think the attack was coming anywhere except Sicily, it would be a great advantage.

And that’s where Major Martin comes in. British intelligence developed a hare-brained scheme dubbed Operation Mincemeat to deceive the Germans. Fake documents would be planted on a corpse, which would be deliberately allowed to fall into enemy hands. If all went well, the Germans would begin preparing for an invasion that would never happen. And Sicily would fall into Allied hands. 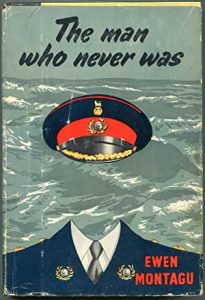 As told in the postwar book “The Man Who Never Was” by Ewen Montagu, one of the planners of Mincemeat, the first step was procuring a corpse. Next would be creating a false identity for the man—the name William Martin was chosen because it was so common a name the Germans wouldn’t be able to trace him.

Montagu did not identify the body used, but more recent research has indicated that may well have been a Welsh homeless man with no family by the name of Glyndwr Michael. Two sailors who had been killed in a ship’s explosion have also been suggested, but Michael is buried in Spain under both his own name and William Martin’s.

Martin’s identity had to be extremely convincing, and so an entire back story was invented for him. Captain (Acting Major) Martin was to be a courier for British officers. To provide him a well-rounded biography, he was given a father whose letters were on his person, and a girlfriend in London. She wrote him love notes; they went together to the theater (ticket stubs were in his wallet); and things were seemingly about to become serious. Major Martin had the receipt for an engagement ring with him. No detail was overlooked in making his fictional story seem believable. 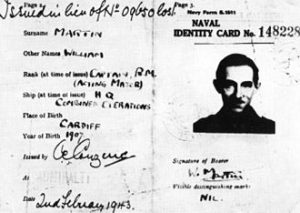 Major Martin’s identity card. Since a life-like photo of a corpse couldn’t be taken, a British officer who resembled the body was used.

More important were the official documents he carried. A briefcase was chained to his wrist—couriers didn’t typically use such devices, but British intelligence was banking on the Germans not knowing that. In the briefcase were letters between British generals discussing, among other things, the difficulties in planning an invasion of Greece. They were as absolutely convincing as Mincemeat could make them.

When all was prepared, Major Martin’s remains were taken by submarine to the coast of Spain, and dropped into the sea in a place where the currents were sure to bring him to the beach. Spain was neutral in the war, but was friendly with Nazi Germany. Allied planners could be absolutely certain any juicy intelligence the Spanish uncovered would be turned over to the Germans.

Once the good major was adrift, the success of Operation Mincemeat was out of Allied hands. It would be years before we would discover whether or not it worked. But in fact, the body was indeed found by the Spanish and photos of the documents turned over to the Germans. They seemed convinced that this body with the revealing letters was a courier whose plane had gone down over the Mediterranean, and which fortune had now brought to them. In a bizarre coincidence, the death of Major Martin was reported in British papers the same day as the loss of actor Leslie Howard (Ashley Wilkes from “Gone with the Wind”). Howard had perished when his plane was shot down over the Mediterranean. For any Germans paying attention, it added a level of plausibility to the Mincemeat story.

While the defense of other areas like Sicily was not abandoned, extra emphasis was given to shoring up Greece from invasion. No less an officer than Rommel was assigned to go to Greece and make German forces there ready for an invasion.

The invasion of Sicily in July 1943 was a success, and Allied forces moved on to invade Italy soon after that. Perhaps these crucial steps to victory in Europe would have succeeded even without Operation Mincemeat, but it stands to reason that every German sent to Greece was one we didn’t have to fight in Sicily. And that makes the short, successful espionage career of William Martin some history that should be remembered.