During World War II, not a single African-American serviceman was awarded the Medal of Honor, the nation’s highest military honor for valor. Despite the service of some one million African Americans, including many credited with incredible feats of heroism, the highest award was denied to black servicemen by the segregated military. Only in 1997 was this rectified, when seven World War II vets were so honored, six posthumously.

While the Medal of Honor naturally involves extraordinary service and “gallantry and intrepidity at the risk of his life above and beyond the call of duty,” the fact that a color barrier existed at the time indicates that many more heroes could have been so honored.

Recently, a renewed effort was undertaken to remedy one such case. It’s a case of under-recognized valor for which the National D-Day Memorial has tried to raise awareness since 2016. It’s the story of D-Day hero Waverly Woodson. Allow us to tell you his story. 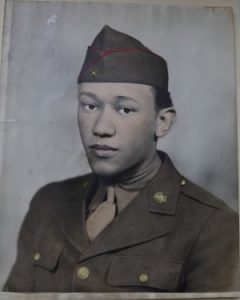 Waverly Bernard “Woody” Woodson, Jr., was born in Philadelphia in 1922. When the war began he was enrolled in Lincoln University in Pennsylvania, but he left school to enlist in the army in late 1942. Initially, he hoped to enter officer training with an anti-aircraft unit, but no doubt due to the color of his skin he was informed there was not a seat for him in the program. Instead, he was posted to the 320th Barrage Balloon Battalion and trained as a medic. Barrage balloons were the oft-pictured small blimps on a cable flown above an installation or a battlefield to deter low flying aircraft.

Unbeknownst to Woodson and his comrades-in-arms, the 320th would have the distinction of being the only African-American unit to land on D-Day, with elements split between Utah and Omaha Beaches. The story of the 320th was told by researcher Linda Hervieux in her 2015 bestseller “Forgotten: The Untold Story of D-Day’s Black Heroes at Home and at War.” Hervieux spoke at the National D-Day Memorial in 2016, and was joined by William Dabney of Roanoke, a veteran of the 320th. She praised Waverly Woodson as an unsung hero.

On June 6, 1944, Woodson was aboard a Landing Craft Tank (LCT) approaching Omaha Beach when the craft hit a submerged mine. The young medic was wounded by shrapnel, but he also understood he had a job to do that superseded his own physical condition. If he allowed his wounds to incapacitate him, other men would die. Scrambling across the hostile beach, raked by machine gun fire and artillery blasts, Woodson found shelter beneath the shingle and set up an aid station. Continually under fire, he treated the mounting number of wounded men, white and black, for more than a day without rest, all while wounded himself. As Hervieux recorded in her book: “He pulled out bullets, patched gaping wounds, and dispensed blood plasma. He amputated a right foot. When he thought he could do no more, he resuscitated four drowning men. Thirty hours after he set his boots on Omaha Beach, Woody Woodson collapsed.” After only three days of convalescence, Woodson requested that he return to his unit and get back to work. 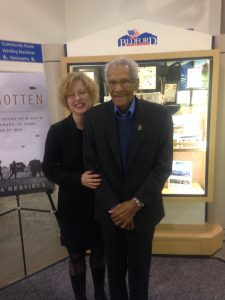 Woodson would be hailed as a hero by many, and especially by the African-American press at home, who dubbed him the “No. 1 Invasion Hero.” What happened next in terms of recognizing Woodson’s exemplary service is unclear; much of the paperwork seems to have been lost to the chaos of war and the disastrous 1973 archives fire that destroyed so many WWII records. But it appears that Woodson’s case was reported for consideration for the Medal of Honor. That effort, however, went nowhere; there is no evidence to indicate why or how.

Only a single note related to Woodson’s Medal of Honor nomination seems to survive: a memo sent to the White House in 1944 stating that a “Negro soldier from Philadelphia” had been nominated for an award “big enough so that the president can give it personally.” The Medal of Honor is the only award typically presented by the president; the note was attached to a newspaper article about Woodson, the only black soldier from Philadelphia known to warrant such consideration.

In the end, Waverly Woodson was awarded the Bronze Star, a high decoration to be sure. But it is fourth in precedence below the Medal of Honor. No explanation of the discrepancy in awards has ever been discovered. It’s not entirely clear whether Woodson’s Medal of Honor paperwork was ever officially submitted at the time or how far into the process of consideration it advanced.

On Sept. 8th this year, Maryland Sen. Chris Van Hollen and a bi-partisan group of his colleagues announced a renewed campaign to award the Medal of Honor to Waverly Woodson. If successful, Woodson’s would be only the fifth Medal of Honor awarded for action on D-Day, and the only one recognizing the valor of the medics on the beaches. The National D-Day Memorial Foundation believes the Medal of Honor designation for Cpl. Woodson is overdue, and remains supportive of efforts to secure the recognition. 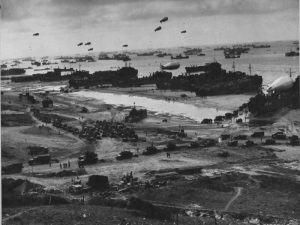 Barrage Balloons, some likely raised by the 320th, fly above Omaha Beach after D-Day.