15 Oct Giving the Army Some Teeth: Dental Care in WWII 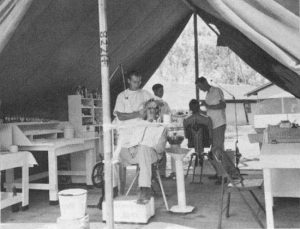 The soldier’s papers and souvenirs were housed in a small wooden box when the man’s son brought it to the National D-Day Memorial. There were many odds and ends: his dog tags, a few patches and ribbons, some foreign currency he kept as souvenirs of war. But one paper hinted at a story of the war that has been largely untold. A record of the man’s various immunizations and other medical care revealed an interesting tidbit: the soldier was fitted with dentures by the army in 1943, both uppers and lowers. It speaks to a larger, largely untold, story: American servicemen and –women in WWII enjoyed some of the best dental care that had ever been offered.

As the American military prepared for possible war in the late 30s and early 40s, its leaders made an unsettling discovery. Our forces lacked teeth. This was true figuratively—the army was far too small and unequipped for the war that was on the horizon. But it was also too often true literally. The dental health of many recruits was deplorable.

Coming out of the Great Depression, routine dental care was a rarity. Even toothbrushes were unknown to many recruits. Not surprisingly, many of the men drafted or enlisted in the army had oral problems ranging from the minor to the severe. Teeth were missing or rotted or in danger of becoming so; miserable men were often rendered incapacitated by toothaches. Some planners were dismissive of the issue: who cares about a cavity or two when we’re short tanks, planes and aircraft carriers?

But others decided the problems must be addressed. Not only were men less effective fighters when unable to chew C-Rations, but when 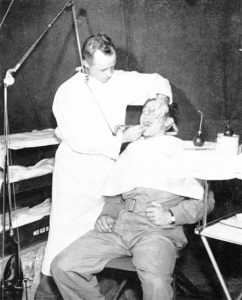 combat began there would certainly be many dental injuries resulting from battle. The US Army decided to look the problem—pardon the pun—square in the mouth and expand a little-appreciated segment of the Medical Corps: the Dental Division of the Office of the Surgeon General. In 1942, that tortuous name was shortened simply to the Dental Service.

Eventually some 18,000 dentists served in the Dental Service during WWII. They were kept busy. Soldiers may have dreaded a visit to the regimental dentist, but the care they received was first-rate and important. In addition to treating oral wounds, the Dental Service performed more than sixteen million extractions, averaging one per man in uniform. Using pedal-driven drills, they performed more than seventy million restorations. More than half a million men were provided with full dentures; two million received partials. For many, these procedures corrected years of dental neglect, pretty much free of charge.

It was important work. Occasionally, it was dangerous work. Twenty US Army dentists were killed in action; more than ninety died of other causes. One army dentist, Captain Benjamin Salomon, was awarded the Medal of Honor for repulsing 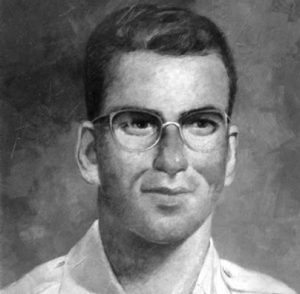 a Japanese attack on his aid station on Saipan.

Army dentists claimed other victories, including some impressive ones outside of the mouth. With so many men losing eyes in combat, there was a sudden shortage of glass eyes. It was dentists who perfected the use of a synthetic resin as a replacement for glass in optical replacements. These plastic eyes were adopted for routine use by the army. Dentists also were credited with developing a special type of plate to repair skull fractures, and with improvements in hearing-aid technology.

When the war ended, the impact of the Dental Corps, and their equivalents in the Navy and Marines, continued. Men who had had dental reconstructive services in the war entered the postwar job market healthier and more confident. Techniques and treatments pioneered near the battlefield—such as the use of penicillin to fight oral infections—were applied to civilian use. The very idea that dental care is an important part of overall healthcare, impacting such other systems as the cardiovascular and digestive, became routine, and it continues to this day.

The dentists of World War II seldom get much attention in the history books. But to them we owe a debt of gratitude for playing a significant part in victory. At the very least, we should offer them an appreciative smile.