Uncovering surprising coincidences are sometimes the most rewarding parts of preserving D-Day history. By definition you never see them coming; if you miss them, you never know they were there. But when everything aligns and unexpected connections are made; when odd circumstances reveal surprising treasures from the past, it becomes a highlight of a day, a month, a career.

Such was the case when the Parkers called with an old heirloom they thought should be in a museum.

But before we get to the Parkers, we need to go back some sixteen years earlier. In 2004, World War II and D-Day veteran Louis Biacchi of New York donated to the National D-Day Memorial a cherished memento of his time in the army. It was a colorful “Cent Francs” note—100 French Francs, printed before the German invasion of that nation, then worth a little more than two American dollars. It doesn’t appear to be an example of the “counterfeit” French currency distributed to some of the invaders prior to D-Day. Seeing little likelihood of spending French money when he arrived in Normandy, Biacchi decided to save it as a souvenir. Scrawling the title “D-Day Memories of Louis Biacchi” and the date June 6, 1944 along the edges, the young soldier took it to his buddies and had them sign their names on the piece of money. It would be his memento of the most historic day of his life, and a record of his comrades in arms, some of whom never signed their name again. With his donation, the relic became a vital part of the National D-Day Memorial’s collection of artifacts, a silent witness to D-Day.

More than a decade-and-a-half later, Dorothy Parker called the Memorial’s offices about making a donation. Her husband’s step-father, Clarence Eugene Huffman, had been dead for years, and most of his wartime mementoes had long ago been distributed to various relatives. However, the Parkers had come across some interesting items tucked away in their Richmond home. First, though, she wanted to tell me about the man.

“Gene” Huffman, she said, had died in the early 1980s, and was one of those veterans who seldom spoke of his war years. Still, she knew a few details of his service: knew he’d been wounded in action, and was certain he was a D-Day survivor. A native of Roanoke who had enlisted in the Virginia National Guard prior to WWII, Huffman had also had once mentioned that he trained with a Ranger unit, and she thought maybe he had climbed the cliffs of Pointe du Hoc.

The story had a familiar outline—it was much the same experience as that of Bob Slaughter, the founder of the National D-Day Memorial. He also had joined the National Guard in Roanoke in peacetime, and also received Ranger training. They two men very likely knew each other, although that cannot now be proven. We informed Dorothy that Huffman was likely in the 116th Regiment, perhaps in Co. D with Bob, and that the Ranger training was almost certainly with the 29th Rangers. We shared other details her family was lacking.

In 1942, selected members of the 29th Division were culled for special training in Scotland. They would prepare to serve as a commando unit for the planned invasion; the exact assignment was not then decided but these Rangers would be elite soldiers when they arrived in France. However, it was not to be. After eleven months, the idea of the 29th Rangers was scrapped and the men folded back into their previous units. Although they wouldn’t be Rangers, the exemplary training they had received would serve many of the men well when the battle was joined. On D-Day, the would-be-Rangers were smart, fit, strong, confident—elite in every way even if they looked no different than the raw recruits next to them.

So Huffman wouldn’t have climbed the cliffs as a Ranger; he would have landed on Omaha Beach—not that that was an easier job. 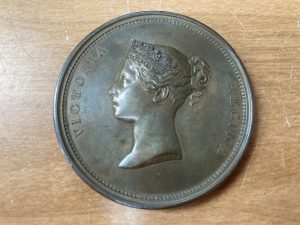 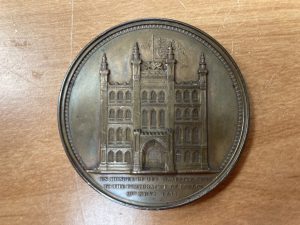 While he was training in Scotland, Mrs. Parker shared, Gene Huffman had been given a gift by the Scottish family with which he was billeted. Their name is lost to history, but when he left them they presented him an old bronze medallion. It was dated 1837, and featured the likeness of Queen Victoria. It commemorated the new teenaged Queen’s first visit to the “Corporation of London” as Britain’s monarch. The piece of British history became the young soldier’s good luck charm—and where he was going he would need plenty of good luck.

There was another artifact the Parkers wanted to donate as well. It was, Dorothy explained, a 100-franc note on which Gene had collected dozens of signatures prior to the invasion. She had thought the men might be Rangers, but now learning that the 29th Rangers had been disbanded prior to D-Day she wasn’t sure what unit or units were represented. But, the family knew, such a piece of history belonged in a museum to be preserved and shared. 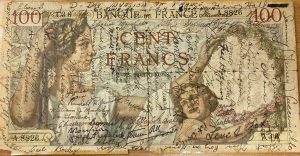 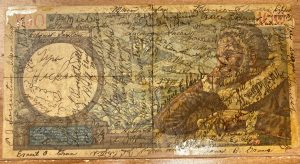 Reverse of Huffman’s French currency, scrawled with dozens of names.

We also told her about Louis Biacchi’s signed 100-Franc note, and she marveled at the coincidence of such a similar piece not only surviving the war but ending up in the same museum.

Memorial staff promised to research Gene Huffman’s service and see what blanks could be filled in; what mysteries could be solved. On a hunch we turned to the “Morning Reports” of the 116th Regiment. Morning reports were semi-daily accountings of personnel, usually gathered on the Company level. They recorded such details as who was wounded, transferred, promoted—or killed in action. Morning Reports are vital sources for military history and the records of individuals soldiers listed.

Sure enough, after a bit of digging, the name Huffman, Clarence E. appeared, wounded later near St. Lo. He was indeed in the 116th, but not in Bob’s D Company. Huffman was in HQ Company for the 1st Battalion of the 116th. HQ Companies are often overlooked. Sometimes their men are dismissed as dull pencil-pushers. While it is true that the primary role of the HQ Company was to provide administrative, logistical, and even medical support to the Battalion and Regiment, make no mistake: they were soldiers, trained to fight and to run into enemy fire. Gene’s HQ company landed on Omaha Beach alongside the other men of the 116th, under the same fire and suffering multiple casualties.

Case in point: suddenly another name jumped off of one particular Morning Report page: a private who was severely wounded on the beach on D-Day. His name: Louis A. Biacchi. The two men with similar pieces of signed currency were actually in the same unit: HQ Company, 1st Battalion, 116th Infantry Regiment, 29th Infantry Division.

The connections went even deeper: examination of the two notes reveal that many of the men who signed one piece signed the other as well. While Huffman seemed to have collected many more signatures, and while many are difficult to read, some names are easily found on both pieces. Included are some who did not survive D-Day. Fred Hopping, Bernard Kirkendall, James Smallwood, Eugene Oikari—these are names also featured on our Memorial Wall of those who fell on D-Day. “Hey pal—sign this for me!” Gene and Louis must have asked their buddies. They couldn’t know they would never see some of them again. Research continues into the names on both notes.

The coincidences went even deeper still. Two names in particular also show up: Gene Huffman and Louis Biacchi. While waiting to board 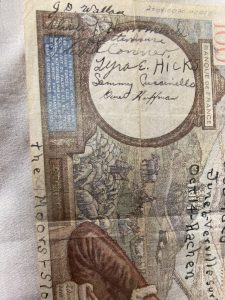 their landing crafts and approach a battle they knew they may not survive, each man signed the other’s Cent Francs souvenir. Louis left the beach for a hospital; Gene was wounded afterwards. Signing each other’s French bills may well have been the last time the two saw each other.

Now the two pieces of history, the two monetary collections of signatures, have been reunited, whispering ghostly names to us across seven and a half decades. Every name the two buddies collected tells a story; together the rosters scrawled onto old currency tell another. The National D-Day Memorial exists to tell their stories, to preserve their legacy of valor, fidelity and sacrifice which still awes us, still inspires. For Louis, and Gene, and the other men who were there, and those who never came home, we honor you. Your story goes on.