05 Mar How Many D-Day Veterans Are Still With Us?

At the National D-Day Memorial, saying goodbye is a sad reality.

Our day happens to coincide with the gradual passing of the Greatest Generation. The WWII heroes who once were daily visitors to our site are only occasionally able to visit these days, especially after a year of Covid-19. While we still maintain close friendships with many veterans in their mid- to late-90s, so many others have passed into history. We consider the opportunity to know, learn from, and honor these eyewitnesses to history to be among the greatest of privileges. 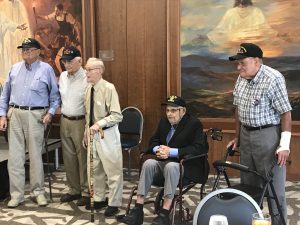 Norwood Thomas, at far left, with other Normandy Veterans, June 5, 2018.

Most recently we have mourned the passing of Norwood Thomas, a D-Day paratrooper whose visits to the National D-Day Memorial created many happy memories for our staff and volunteers. Norwood seldom missed a June 6th commemoration through the years, and he served as our keynote speaker on June 6, 2016. He jumped on D-Day with the 101st Airborne, landed in a glider for Operation Market-Garden in Sept. 1944, and was wounded in the Battle of the Bulge that December. He later served in Korea as well. He answered the final roll call on January 24 this year at age 98. As George Patton said, “It is foolish and wrong to mourn the men who died. Rather, we should thank God that such men lived.”

The passing of Norwood and so many others in recent years raises a challenging question: How many D-Day Veterans are still alive? It’s a question we are asked often, especially by the media in days leading up to June 6 each year.

Unfortunately, it’s a question for which there is no clear answer.

Primarily, it is crucial to understand that there is not, nor has there ever been, anything like a comprehensive roster of D-Day veterans. Individual units involved in the invasion, of course, had rosters at the time, but no one ever compiled them into an overall listing of D-Day participants. Therefore, there is no checklist from which to remove veterans as they pass away.

For that matter, there is no clear consensus on what qualifies a person as a “D-Day Veteran.” An infantryman who charged across Omaha Beach or a paratrooper who jumped into Ste. Mere Eglise is obviously in that category. But recall that there were also sailors and coastguardsmen serving in the Channel, there were pilots and crewmen flying overhead, and many men in reserve who may not have landed until the 7th or 8th. Then there are support troops—loading LSTs, treating wounded who return to England, fueling airplanes, etc.

So there is no way to answer the question “How many D-Day veterans are alive today?” since we don’t know how many there ever were. The best we can do is make a series of estimates. DISCLAIMER: the following numbers were compiled by a history major for whom math is a foreign language!

Let’s begin with the big number. The generally accepted estimate of Americans who served in uniform during World War II is 16 million. According to the Department of Veteran’s Affairs, there were 325,574 still living last September (this number is based, of course, on an estimate, not an actual census). By September 2021, the estimate is that 240,329 will still be with us. That number, however, may not take into account the pandemic and the inevitable fact that WWII vets are among the most vulnerable. For the sake of argument today (March 5, 2021) let us round off and say that 300,000 WWII vets are still living. That is approximately 1.8% of the 16 million. 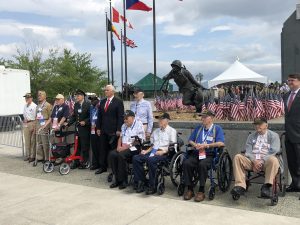 WWII veterans honored by the Vice President at the National D-Day Memorial, June 6, 2019.

Now, let’s assume a number of 150,000 men were involved with the Normandy invasion on June 6, 1944. (For our purposes today, we’ll draw a distinction between “D-Day Veterans” and the larger population of “Normandy Veterans,” most of whom crossed the channel after June 6.) The usual number for US men landing in France on D-Day is 73,000. At least 2,502 did not survive the day, so let us assume that there were about 70,000 men in France on June 7th who were now “D-Day veterans.” For the sake of argument, let’s double that to account for the back-stage service personnel in the Navy, Coastguard, Army Air Force and service units. Assume a rounded-off number of 140,000 Americans were D-Day participants.

All of this is, of course, guesswork. But in the absence of a real count, it might be the best we can do to answer the question above. A range of 2,520 to 2,625 D-Day veterans is enough, however, to move us to a moment of reflection. We have been most fortunate to have lived during the same years as these American heroes, and most regretful to have said farewell to so many. But we may also reflect that even now, more than three-quarters of a century after the “Great Crusade” commenced, there are still men among us to honor.