17 May D-Day Assault Vests: Preserving a Bit of History

We’ll never know who the soldier was, but this we can tell: he didn’t like his vest much. At some point after D-Day, a few miles inland from the beach, he got rid of the thing. Perhaps a supply truck passed by with a regular army-issued field pack; perhaps he traded some other soldier some cigs or dry socks for a spare rucksack he didn’t need. Whatever the circumstances, the soldier transferred his gear, carefully folded the vest, and left it under a bush.

Almost eight decades later, that discarded vest is one of the rarest artifacts in the collection of the National D-Day Memorial, telling one of the lesser-known stories of the invasion. The invasion vest—or assault jacket—has largely been forgotten today because, like the unknown soldier above, almost no one liked the things and soldiers were generally quick to get rid of them, or they were taken back by an army which was done with them. Only a few survive today.

It was a long, circuitous route that brought the vest to the Memorial. Not long after D-Day, a young officer, G. V. Piercy, was assigned the job of finding a suitable bivouac site for a unit soon to arrive in France. The site had to be accessible, reasonably flat, large enough for the unit, and had to drain adequately in the wet Norman summer. While investigating the drainage of a site, Piercy noticed a piece of folded olive-drab fabric under a bush. In pre-invasion training, he had been told never to pick up such an item: the Germans may have left it as an explosive booby-trap. But curiosity got the better of Piercy. He carefully attached some string to the thing, retreated to a safe distance, and pulled it out. Nothing exploded. So he picked it up and examined it. 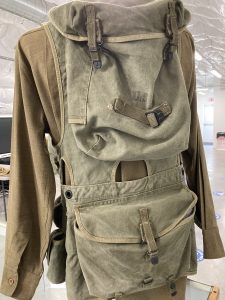 What he found was an odd, sleeveless jacket with multiple pockets, including two large ones on the back which could replace the standard-issue M-1928 field pack. Piercy had never seen one, but he thought it might be useful in stowing his gear. He kept the vest for the rest of the war, and took it home with him at the end.

Decades passed. Piercy stayed in the army, eventually retiring as a lieutenant colonel. He also began to collect military artifacts, including some of the gear he had personally used in France. The vest was stored away with his other collectibles, but through the years he’d get it out, show it to interested collectors, even loan it to museums for display. But he never could figure out exactly what it was, why it was issued, or to whom; nor could anyone else who saw it could tell its history either.

About 1979, curiosity again got the better of Piercy. He contacted the museum at West Point, and was told there was another vest in their collection, but the curator knew little about it. According to his records, though, it came from a veteran of the 29th Division. Hearing of an upcoming reunion of 29ers in Virginia, he wrote to the division’s newsletter to ask if anyone recalled such a garment as he had. Soon, letters poured in. Some men had no idea what it was, but others—especially vets of the 116th Regiment—immediately recognized the assault jacket.

The vests were indeed issued to some members of the 29th Division, and also to the 1st Division in limited quantities. There is some evidence a few members of the 4th Division, slated to land at Utah Beach, also received them. The reason everyone didn’t get one was simple: there weren’t enough to go around.

For some years, the US Army Quartermasters had explored the idea of a vest to carry necessary gear in an amphibious assault. The inspiration was a similar garment used by the British and Canadians called a “Battle Jerkin.” Elaborate tests were done for the American version, various redesigns were engineered, and a final design eventually approved. The Assault Jacket had multiple front pockets, including small ones which could each carry a grenade, and grommets to which a canteen, first aid packet, or other gear could attach with wire hangers. On the back were larger pockets which would carry rations and other gear that needn’t be quickly accessed.

However, by the time all of this development was finalized, there was no time to produce enough for the Normandy Invasion. Only about 14,000 were ever shipped to England; it’s hard to determine how many were ever issued. 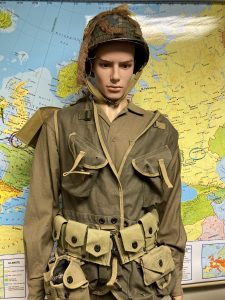 A reproduction vest on a mannequin, showing the vest with other

The designers, however, failed to consider one eventuality: the men almost uniformly hated the things. They proved to be bulky, heavy (especially when wet), and hot. Given the other gear issued for the invasion—an inflatable life belt, a gas mask, bandoliers of ammunition—the men felt perilously overloaded. Running was difficult with a heavy garment extending below the waist. Men diving to the ground for cover found themselves lying a few inches off the dirt—maybe not enough to make them a better target, but enough to make them feel vulnerable. Unlike the tried-and-true army packs—with which the men had trained for years—the vests were difficult to remove in a hurry. Interestingly, the Marine Corps in the Pacific also did some field testing of the assault jacket in late 1944, but rejected them as more impediment than advantage.

Many men discarded their vests as soon as they could get the familiar pack. For most of the rest, the army traded them out within a few weeks of D-Day. They were, after all, designed for the assault across the beaches, not the march across Europe. The vests were never used again. At least one source claims they were buried as a method of disposal. As a result, they were soon forgotten and few examples survive. 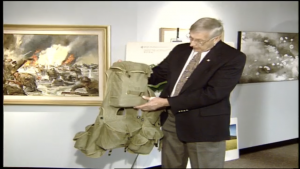 In 1997, Col. Piercy heard of the National D-Day Memorial, then under construction in Virginia, and arranged to donate his vest. It was perhaps the first truly significant artifact collected by the organization. NDDMF founder and D-Day veteran Bob Slaughter was present to receive the donation, and told a reporter at the time that he certainly recalled the assault jacket with some degree of disdain. “I took off running with that assault vest” across 300 yards of open beach, he recalled. When he got to cover, he took off his vest in order to clean his rifle, which had jammed. He found the top flap shot off and his rain coat, stored in one of the pockets, riddled with bullet holes. “That really shook me up,” Slaughter recalled. “Trying to run with that load slowed you down so much. I was kind of stupid [not to discard the vest].”

Today, the Piercy assault jacket is on display in our Education Quonset Hut, where school children on field trips and interested visitors touring the exhibits can see the rare piece. Thanks to the curiosity and diligence of Col. Piercy, a forgotten witness to D-Day can still tell its story.