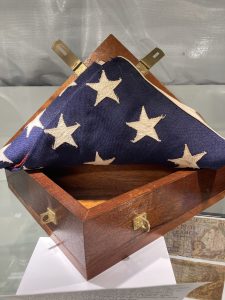 The Harvey Flag from Omaha Beach.

Every artifact on display in the Fleda A. Ring Education Quonset Hut at the National D-Day Memorial tells a story. One of the newest additions to the exhibits there tells a particularly poignant one—a story of danger, loss, and a firm alliance. At first glance, it appears to be only an old, worn US flag with 48 stars. Once the story is told, however, it becomes much more.

On June 6, 1944, the greatest combined land/sea/air invasion of the war began on the beaches of Normandy. While we often divide the five beaches by nationality, the actual mix of Allied troops transcended national borders quite a bit. There were British soldiers with the Canadians at Juno; there were American sailors with the Brits at Sword and Gold; and there were British men alongside the Americans at Utah and Omaha. The story of this flag involves British sailors caught in the killing field that was Omaha Beach.

The story begins with the Landing Barge (Vehicle), one of many types of vessel pressed into service on D-Day. Little remembered today, the 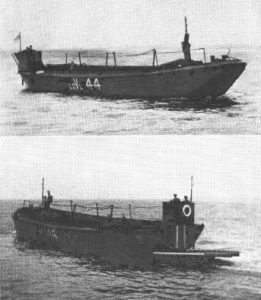 Landing Barge (Vehicle), with ramp up and down.

landing barges were slow, lumbering vessels designed to deliver any sort of vehicle to a beach under fire. Some had been converted from carrying prewar cargo on the Thames; a few were turned into floating kitchens and arrived after D-Day to feed the hungry men. Some LBVs were loaded with trucks which in turn were loaded with necessary supplies or fuel. Upon landing, these would be driven off of the barge by American soldiers.

Each barge was designed to back into the beach stern-first (after dropping an anchor at sea) and offload its cargo. Armed only with a couple of automatic Lewis Guns, the barge would inevitably be a tempting target for German artillery.

In theory, once the cargo was offloaded from an LBV, the increased buoyancy should have allowed the barge to be winched back to sea by the anchor chain. However, this did not always work as planned. Some barges found themselves stuck until the tide rose enough to free them; others were too damaged by enemy fire to return to sea. As a result, some British sailors found themselves stranded on Omaha Beach alongside the struggling Americans of the 1st and 29th Divisions.

On D-Day, Lieutenant Joe Harvey of Cornwall, Royal Navy Reserves, was in command of Landing Barge (Vehicle) Number 11 approaching Omaha Beach. Finding the situation beyond chaotic and unable to extricate his LBV, Harvey dashed across the beach to the relative safety of the seaside cliff. His intention was to take control of the flotilla of barges coming behind him; and signal vessels at sea to avoid congested areas. At the cliff, he ran into 19-year-old Royal Navy sailor Cliff Mitchell, who was stranded from LBV-61. Mitchell, trained in semaphore, became a signalman for Harvey.

As the battle proceeded, the two British sailors noticed something bobbing at water’s edge. It was an American flag. All around them, American boys were dying on the beach. While the Alliance between the US and UK was at times strained, at that moment Harvey and Mitchell made a snap decision. Instinctively they ran to the surf, braving enemy fire, and retrieved the flag of their ally.

How the flag came to be floating in the channel was anyone guess, but based on the area where they were, Mitchell always assumed it had been dropped by a soldier of the 116th Regiment or blown off of a landing craft that didn’t make shore. Returning with the flag to the cover of the cliff, Lt. Harvey carefully folded the flag and stowed it away. After D-Day he returned to England for other duty. Somehow he never found occasion to return the orphaned flag to an American. When the war ended, he kept the Stars and Stripes as a cherished souvenir.

Fast forward five-and-a-half decades. Joe Harvey died in 1999. One of his last wishes, expressed to his son Philip, was to have the flag returned home to the United States. Through friends, Philip learned that veterans of the 29th Division would be visiting Britain that year. He arranged to have the flag presented to American naval personnel in a somber ceremony, and then turned over to the 29th Division Association. It was decided that the flag would ultimately find a home at the National D-Day Memorial in Bedford, Virginia, then under construction. It was not until 2001, when the Memorial was being dedicated, that the flag, a survivor of Omaha Beach, arrived in Bedford. 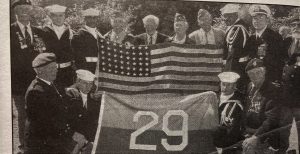 Today, the flag is on display with other “silent witnesses” of D-Day. It stands for the 2,502 Americans known to have died on June 6, 1944, more than half of them on Omaha Beach. And it represents the faithful British allies who fought alongside them. At the National D-Day Memorial, we tell their story every day.