A recent donation to the collection of the National D-Day Memorial brings to mind one of the forgotten success stories of the American war effort: the little-remembered Cadet Nurse Corps.

World War II was in full swing for the US in the spring of 1943. In Europe, the fight for North Africa was winding down, and plans for the invasion of Sicily would soon be finalized. The inevitable Cross-Channel invasion had been delayed another year, but in 1944 the Allies would be landing in northern France. Across the globe in the Pacific, soldiers and marines battled with deadly intensity for islands with unpronounceable names of which few Americans had ever heard.

But wherever American boys were fighting, one thing was inevitable: many would be killed, and even more wounded. And when wounded, they would need—and deserved—the best medical care possible. The military could train battlefield medics and corpsman as needed. Doctors and surgeons were always required, but there tended to be a sufficient number in most places to handle major medical care. But doctors didn’t usually change bandages and empty bedpans. Someone—a lot of someones—had to handle the day-to-day, exhausting, challenging work of routine care of the wounded and recovering.

Hence, to many, it was becoming clear: as the war progressed the US would soon face a dire shortage of trained nurses.

In both the army and navy uniformed nurses performed feats of compassion and heroism. Wounded men often looked on the nurses as angelic bringers of comfort. On the home front, in convalescent hospitals, civilian nurses and even volunteers assisted with the recovering. But in 1943, no one had any illusions that the war would soon end. As Allied militaries continued their march closer to the hearts of our enemies, the number of wounded would only increase. The need for nurses was quickly outpacing the supply. 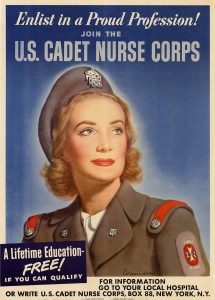 From this projected need came the Cadet Nurse Corps of World War II, a great success that is not nearly well enough known today.

The prime originator of the Cadet Nurse program was Congresswoman Frances Bolton of Ohio, long an advocate of nurse training. Bolton had entered congress in 1940 after the sudden death of her husband, Congressman Chester Bolton. She would serve until 1969—interestingly for a few terms with her son, Oliver, the only mother-son duo to ever serve concurrently in Congress. As a legislator, Mrs. Bolton had opposed the draft and Lend-Lease, but war became necessary she whole-heartedly supported the men and women in uniform. A proponent of civil rights, she pushed, among other initiatives, for the nursing corps to be integrated.

In 1943, to meet the growing nurses shortage she observed, Congresswoman Bolton sponsored  the Nurse Training Act, commonly called the Bolton Act. So obviously a good idea, it passed unanimously by Congress and was signed into law by President Roosevelt in June. The act created a Victory Nurse Corps (soon renamed the Cadet Nurse Corps–CNC) under the administration of the Public Health Service.

Qualified candidates who enrolled would receive free nursing education at one of the nation’s established nursing schools, along with free room and board. The training would be an accelerated, highly intense two-year crash course, at the end of which the cadet pledged to serve as a nurse (either civilian or military) for the duration of the war, which some at that time were predicting could go into the late 1940s. In the longer term, the cadet nurse would end up with training that could support a life-long medical career. 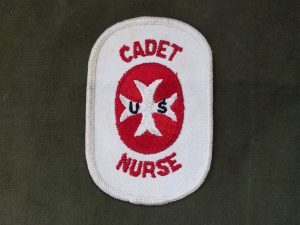 Of the nation’s 1300 nursing schools, more than 85% participated in the program. Some smaller and less demanding schools were greatly improved by participation as they increased in rigor to meet standards expected by the program. In theory, and per Bolton’s priorities, the Cadet Nurse Corps was colorblind, and many African-American woman participated. However, that impact was limited by the fact that many of the participating schools remained segregated. It remains unclear exactly how integrated the program ended up being.

One of the 125,000 graduates of the program was Bedford’s Ruth Watson. Born in 1925, Ruth graduated from Moneta High School in 1942 and went to Washington DC to find war work. But when she heard of the Cadet Nurse Corps, she returned to Virginia and enrolled at Roanoke’s Jefferson Hospital. As part of her training, she served at the Portsmouth Navy Hospital. There, like so many other wartime nurses, he met a striking serviceman, Lee Shade. The couple married soon after the war ended, and after moving to California they eventually settled back in Virginia, on a farm not far from the National D-Day Memorial in Bedford County. 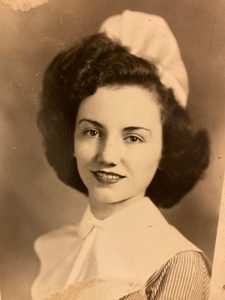 Ruth Watson as a student nurse in World War II. 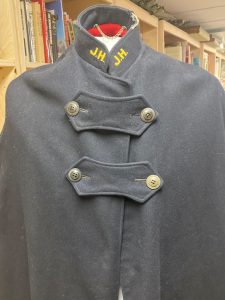 Ruth Watson Shade lived to the age of 96, passing away in May 2021. This summer, family members honored her memory by donating her photograph and the nurse’s cape she wore as part of the CNC. The cape was part of the Jefferson Hospital uniform, not the official Cadet Nurse uniform, and accordingly is monogrammed “JH” on the collar.

(Someone recently asked why nurses wore capes back in those days. Our answer was simple: because they were superheroes!)

In retrospect, we known what the leaders of the CNC did not: the war would not last as long as feared. The two-year program starting in 1943 graduated its first nurses just about the time the war was ending, and the nursing shortage was becoming less acute.

But this is not to say that the effort was wasted. While few Cadet Nurses ended up supporting the war effort directly, the service they rendered during training proved essential to hospitals on the home front. With so many nurses caring for wounded soldiers, a civilian recovering from surgery or a child with a broken bone often found it was a Cadet providing care. The CNC alleviated a nursing shortage at home that had been hidden by the acute needs of the military.

Furthermore, many cadet nurses continued to serve for years or decades after the war, rendering vital medical assistance to generations of patients. If the Cadet Nurse Corps didn’t quite fulfill its original purpose because the war thankfully didn’t last longer than 1945, it still remains one of the great success stories of the American war effort and a fascinating chapter of our nation’s medical history.