As schools throughout the nation cancel field trips and move classes online, the National D-Day Memorial is proud to offer FREE virtual programs on World War II to supplement your curriculum.

Please see the upcoming virtual program information and dates below. Recordings will be posted to this website within a week of the live program.

Through the use of propaganda posters, this program will show the varied roles of women in WWII and how propaganda posters in particular were used to influence the public and evoke powerful emotions on the war. 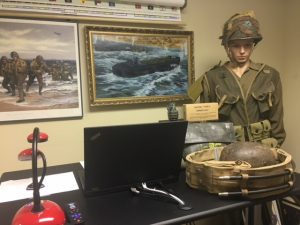 The Outbreak of World War II

Barely 20 years after the First World War ended, why did another begin? What factors led to the outbreak? What mistakes were made? And was World War II inevitable? Join us as we explore the many factors and events that led to World War II through artifacts, maps, and discussion.

The D-Day Invasion of Normandy, France

What was it like to storm the beaches on the “Day of Infamy?” Learn about what it was like for a soldier on D-Day by exploring the equipment, piece by piece, while hearing stories these veterans shared to National D-Day Memorial staff.

One Woman and 150,000 Men: The Story of Wartime Correspondent Martha Gellhorn

“I followed the war wherever I could reach it.” From the Spanish Civil War to Panama, Martha Gellhorn covered most major conflicts in her 60-year career as a wartime correspondent. She is also the only known woman to have landed as a part of the invasion of Normandy on 6 June 1944, but not because of an official assignment but her desire to cover war—and maybe to get back at her husband, Ernest Hemingway, for stealing her job. Discover how her marriage and work intertwined in World War II to give her the distinction of being the only woman among 150,000 men on D-Day during this riveting lecture.

“He was the bravest man I ever met.” If a WWII veteran ever said that, he was usually talking about a battlefield medic. What did it take to face enemy guns armed only with gauze dressings and stainless steel scissors? Learn about the role of combat medics in World War II, see some of their equipment, and discover why they deserve to be remembered today.

World War II was arguably the biggest event in all of human history. Just as a runaway locomotive can’t be stopped easily, it would take a lot to end this massive war. What factors led to the conclusion in both Europe and the Pacific? And what did it all mean? Join us as we explore the end of World War II and its impact on the 20th century to today.

The New Normal: Life in the United States during World War II

After Pearl Harbor, life changed dramatically for Americans, not just those in the military but those left at home. Women went to work in the factories while men left for war. Children grew Victory Gardens instead of having extra room on the playground. Grocery shopping saw the introduction of rationing and limited supply. Learn more about how Americans rose to the challenge of their new normal and supporting the war effort during the 1940s during this program.

The only U.S. memorial dedicated to the Invasion of Normandy, France on June 6, 1944 is located in Bedford, Virginia. During this live tour of the National D-Day Memorial, learn more about the planning of D-Day, the invasion, and its aftermath while exploring the beautiful tribute to the over 150,000 men who stormed the beaches seventy-six years ago.

Have you noticed the lack of supplies in the aisles of supermarkets lately? The lack of items and limiting the number purchased is not new to the United States during crisis. During World War II, country wide rationing was implemented to make sure that everyone had enough. Learn more about this system and try your hand with shopping with rations during this program.

What is Memorial Day?

Memorial Day weekend often looks like cookouts and beach trips. But, why do we commemorate Memorial Day? Learn more about the significance of this holiday and how to honor those who died fighting for our freedom through making poppies during this program.

75 years ago on May 8, 1945, the war against the Nazis was over. The Allies had won Europe back! Learn more about the celebrations that occurred throughout the United States and Europe, why it is an important day, and make your own “V-Pin” to celebrate victory during this program.

Perhaps more than any other war in history, WWII was decided by intrepid leadership on one side, and the failures of leadership on the other. In this virtual program, tailored to Virginia Standards of Learning, discover the “Top 10” leaders of WWII and why their decisions shaped the future of the world.

One Chance is All You’ll Need: Jesse Owens, Nazi Ideology, and the 1936 Olympics

Jesse Owens defied Nazi Ideology of superiority with his achievements at the 1936 Olympics in Berlin.  He won four gold medals (setting an Olympic record in the 100-meter dash and a world record in the 200-meter dash.)  When President Bush posthumously awarded Owens the Congressional Medal of Honor in 1990, a decade after his death, he commented that his victories in Berlin were “an unrivaled athletic triumph, but more than that, a triumph for all humanity.”

Berlin’s Olympic games in 1936 centered on Nazi propaganda.  Berlin’s city streets were draped in swastikas.  Amid shouts of “Heil Hitler” and goose-stepping troops, this terrifying new political system was introduced to the world.  To this day, debate continues on whether or not other countries should have participated in an event that the Nazi’s used for political purposes.  Discover how one man in the midst of it all (the African-American son of a sharecropper and the grandson of slaves), challenged Hitler’s obsession of Aryan supremacy.