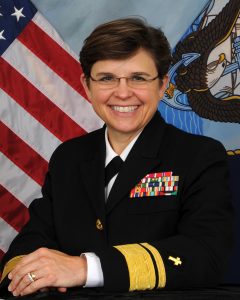 Kibben, a native of Warrington, Pennsylvania, entered active duty in 1986 through the Navy’s Theological Student Program.  She earned a Bachelor of Arts from Goucher College, Towson, Maryland and Master of Divinity and Doctor of Ministry from Princeton Theological Seminary, Princeton, New Jersey, and a Master’s in National Security and Strategic Studies from the Naval War College, Newport, Rhode Island.

With the U.S. Marine Corps, Kibben served at Marine Corps Base Quantico, Virginia; as chaplain to Headquarters and Service Battalion, Security Battalion, the Brig, Marine Corps Air Facility and HMX-1.  She also served with the Marines of Second Force Service Support Group Camp Lejeune, North Carolina, deploying to Turkey and Norway.  Later she was assigned to the Marine Corps Combat Development Command in Quantico as the doctrine writer for Religious Ministry.

In her final active duty assignment in the Navy, Kibben, was the U.S. Navy’s 26th Chief Chaplains, serving as the director of religious ministry for the Department of the Navy, advising the Secretary of the Navy, the Chief of Naval Operations, Commandant of the Marine Corps, and Commandant of the Coast Guard on all matters pertaining to religion in their respective services.   Prior to this assignment, Kibben served as the 18th chaplain of the Marine Corps and deputy Chief of Chaplains.