The Regime: A View from the Inside

Nazi Germany (the Third Reich) is a name given to the German state from 1933 to 1945 when it was under a totalitarian dictatorship ruled by Adolf Hitler and his Nazi Party. On January 30, 1933, Adolf Hitler legally became Chancellor of Germany, installed by President Paul Von Hindenburg. Initially he headed a coalition government, he quickly made Hindenburg a puppet and eliminated his non-Nazi partners. The Nazi regime brought back economic prosperity and ended unemployment using heavy military spending while suppressing labor unions and strikes. The return of prosperity gave the regime immense popularity. The party’s platform was based on total state power and the elimination of Bolshevism and certain minorities.

The Gestapo, which were secret state police, under Heinrich Himmler destroyed the liberal, socialist and Communist opposition and persecuted the Jews, seeking to force them into exile while taking their property. The Party took control of the courts, local government, and all civic organizations except the Protestant and Catholic churches. All expressions of public opinion were controlled by Hitler’s propaganda minister, Joseph Goebbels, who made effective use of film, mass rallies, and Hitler’s hypnotic speaking. The Nazi state idolized Hitler as its Führer, putting all powers in his hands. Nazi propaganda centered on Hitler and was rather effective in creating what historians called the “Hitler Myth—Providence come true”. Hitler had a narrow range of interests and decision-making was diffused among overlapping, feuding power centers; on some issues he was passive, simply assenting to pressures from whomever had his ear. All top officials reported to Hitler and followed his basic policies, but they had considerable autonomy on a daily basis.

Hitler’s diplomatic strategy in the 1930s was to make supposedly reasonable demands, threatening war if they were not met. This strategy worked as Germany left the League of Nations. Also, they rejected the Versailles Treaty and began to re-arm, winning back the Saar, re-militarized the Rhineland, formed an alliance with Benito Mussolini’s Italy, sent massive military aid to Franco in the Spanish Civil War, annexed Austria in the Anschluss, took over Czechoslovakia after the British and French appeasement of the Munich Agreement of 1938, formed a peace pact with the Soviet Union (Molotov-Ribbentrop Pact) in August 1939, and finally invaded Poland in September 1939. Britain and France declared war and World War II began—somewhat sooner than the Nazis expected or were ready for.

During the war, Germany conquered or controlled most of Europe and Northern Africa. The Nazis persecuted and killed millions of Jews, Slavic, Romani and other people and others in the Holocaust Final Solution. Despite its Axis alliance with other nations, mainly Italy and Japan, by 8 May 1945 Germany had been defeated by the Allied Powers, and was occupied by the Soviet Union, United States, UK and France.

A View From Inside 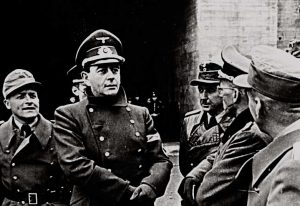 As early as August 1942, Hitler had assured the naval leadership that the Allies could not make a successful invasion unless they were able to take a sizable port. Without one, he pointed out, an empty landing at any point on the coast could not receive sufficient supplies long enough to withstand counterattacks by the German forces. Given the great length of the French, Belgian, and Dutch coasts, a complete line of pillboxes spaced close enough to offer mutual protection would have far exceeded the capacity of the German construction industry. Moreover, there were not enough soldiers available to a man such a large number of pillboxes. Consequently, the larger ports were ringed with pillboxes, while the intervening costal areas were only protected by observation bunkers at long intervals. Some fifteen thousand smaller bunkers were intended to shelter the soldiers during the shelling prior to an attack. As Hitler conceived it, however, during the actual attack the soldiers would come out into the open, since a protected position undermines those qualities of courage and personal initiative which were essential for battle.

Hitler planned these defensive installations down to the smallest details. He even designed the various types of bunkers and pillboxes, usually in the hours of the night. The designs were only sketches, but they were executed with precision. Never sparing in self-praise, he often remarked that his designs ideally met all the requirements of a front line soldier. They were adopted almost without revision by the general of the Corps of Engineers.

For this task we consumed, in barely two years of intense building, seventeen million three hundred thousand cubic yards of concrete worth 3.7 billion DM. In addition the armaments factories were deprived of 1.2 million metric tons of iron. All this expenditure and effort was sheer waste. By means of a single brilliant technical idea the enemy bypassed these defenses within two weeks after the first landing. For as is well known, the invasion troops brought their own port with them. At Arromanches and Omaha Beach they built loading ramps and other installations on the open coast, following carefully laid-out plans. Thus they were able to assure their supplies of ammunition, implements, and rations, as well as the landing of reinforcements. Our whole plan of defense has proved irrelevant.

Rommel, whom Hitler had appointed inspector of the coastal defenses in the west at the end of 1943, showed more foresight. Shortly after his appointment Hitler had invited him to the East Prussian headquarters. After a long conference he had accompanied the Field Marshall outside his bunker, where I was waiting since I had the next appointment. Apparently the discussion they were having flared up once more when Rommel bluntly told Hitler: “We must repulse the enemy at his first landing site. The pillboxes around the ports don’t do the trick. Only primitive but effective barriers and obstacles all along the coast and can make the landing so difficult that our countermeasures will be effective.”

Rommel went on in a succinct, firm manner: “If we don’t manage to throw them back at once, the invasion will succeed in spite of the Atlantic Wall. Toward the end in Tripoli and Tunis the bombs were dropped in such concentrations that even our best troops were demoralized. If you cannot check the bombing, all the other methods will be ineffective, even the barriers.”

Rommel spoke courteously, but aloofly; he noticeably avoided the formula, “mein Fuhrer.” He too had acquired the reputation of being a technical expert; in Hitler’s eyes he had become a kind of specialist in combating Western offensives. That was the only reason Hitler received Rommel’s criticism calmly. But he seemed to have been waiting for the last argument about the concentrating bombings. “Here is something I wanted to show you today in that connection, Field Marshal.” Hitler led the two of us on an experimental vehicle, a completely armored truck on which an 8.8 centimeter antiaircraft gun was mounted. Soldiers demonstrated the speed with which it could be fired and the safeguards against side-sway when it was fired. “How many of these can you deliver in the next few months, Herr Saur?” Hitler asked. Saur promised a few hundred. “You see, with this armored flak weapon we can take care of the concentration of bombers over our divisions.”

Had Rommel given up arguing against so much amateurishness? At any rate, he responded with a contemptuous, almost pitying smile. When Hitler saw that he could not draw out the expressions of confidence he had been hoping for, he curtly bade Rommel good-by and returned to his bunker, out of sorts, for the conference with Saur and me. He did not mention the episode. Later, after the invasion, Sepp Dietrich gave me a vivid account of the demoralizing effect of massed bombing on his elite divisions. The soldiers who had survived were thrown completely off balance, reduced to apathy. Even if they were uninjured, their fighting spirit was shattered for days.

On June 6, I was at the Berghof about ten o’clock in the morning when one of Hitler’s military adjutants told me that the invasion had begun early that morning.

“Has the Fuehrer been awakened?” I asked.

He shook his head “No, he receives the news after he has eaten breakfast.”

In recent days Hitler had kept on saying that the enemy would probably begin with a feigned attack in order to draw our troops away from the ultimate invasion site. So no one wanted to awaken Hitler and be ranted at for having judged the situation wrongly.

At the situation conference in the Berghof salon a few hours later Hitler seemed more set than ever on his preconceived idea that the enemy was only trying to mislead him. “Do you recall? Among the many reports we’ve received there was only one that exactly predicted the landing site and the day and hour. That only confirms my opinion that this is not the real invasion yet.”

The enemy intelligence service had deliberately played this information into his hands, Hitler maintained, in order to divert him from the true invasion site and lure him into committing his divisions too soon and in the wrong place. Misled by a correct report, he now rejected his originally accurate view that the Normandy coast would probably be the focus of the invasion.

During the previous several weeks, Hitler had received contradictory predictions on the time and place of the invasion from the rival intelligence organizations of the SS, the Wehrmacht, and the Foreign Office. As in so many other fields, in this one too Hitler had taken over the task, difficult enough for the professionals, of deciding which report was the right one, which intelligence service deserved more confidence, which one had penetrated more deeply into the enemy’s counsels. Now he scoffed at the various services, calling them all incompetent, and, growing more and more heated, attacked intelligence in general. “How many of those fine agents are paid by the Allies, eh? Then they deliberately plant confusing reports. I won’t even pass this one on to Paris. We simply have to hold it back. Otherwise it will only make our staffs nervous.”

It was noon before the most urgent question of the day was decided: to throw the OKW reserve in France against the Anglo-American bridgehead. For Hitler had the final say on the disposition of every division. He had even been inclined to ignore the demand of Field Marshal Rundstedt, the Commander in Chief of the western theater of war, that these divisions be held in reserve for the impending battle. Because of this delay two armored divisions were no longer able to use the night of June 6-7 for their advance. By daylight their deployment was held up by the enemy bombers, and even before they made contact with the enemy they suffered severe losses in men and material.

This day so crucial for the course of the war had not, as might have been expected, been at all a turbulent one. Especially in dramatic situations, Hitler tried to maintain his calm- and his staff imitated his self-control. It would have been an infraction of the usual tone of casual discourse to show nervousness or anxiety.

But during the following day and weeks, in characteristic but more and more absurd mistrust, Hitler remained convinced that the invasion was merely a feint whose purpose was to trick him into deploying his defensive forces wrongly. He continued to hold that the real invasion would take place at another spot which would have meanwhile been stripped of troops. The navy, too, considered the terrain unfavorable for large-scale landings, he declared. For the time being he expected the decisive assault to take place in the vicinity of Calais- as though he were determined that the enemy, too, would prove him to be right. For there, around Calais, he had ever since 1942 been placing the heaviest naval guns under many feet of concrete to destroy an enemy landing fleet. This was the reason he did not commit the Fifteenth Army, stationed at Calais, to the battlefield on the coast of Normandy.