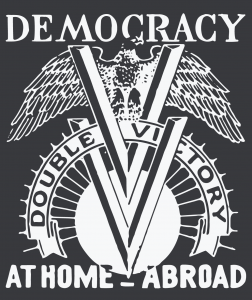 Not only did minority Americans fight fascism abroad, but they were fighting for an end to brutal discrimination at home.

Learn more about the Double V Campaign and how the service of minorities in World War II propelled the United States to desegregate and move towards the Civil Rights movement.

During World War II, African Americans created the Double V campaign shortly after Pearl Harbor to promote democracy through victory at home and abroad. Learn more about this wartime precursor to the civil rights movement in this video.

During WWII, Americans of color were encouraged to wear Double V pins to show their support for the war and equal rights at home. Create your own Double V pin in this fun craft!

Hear stories of minorities who served in the military in WWII and fought for equal rights at home courtesy of the Library of Congress. At the bottom of the blog is a link to these veterans’ oral histories.

Desegregation at Langley Before “Hidden Figures”

Did you know that before the 1960s, NASA (or then NACA) desegregated during WWII before many other industries paving the way for the women in now famous book and movie “Hidden Figures”? In this article, learn more about race relations at Langley’s research labs from the 1920s to the Civil Rights movement.

Learn more about the intriguing heritage of African-American Marines in WWII, the challenges faced by these often-overlooked heroes of the war, and the impact they had on victory in the Pacific.

Learn more about the heroism displayed by Waverly Woodson, a medic from the 320th Barrage Balloon Battalion (the only black unit to land on D-Day), and the current push to posthumously award him the Medal of Honor.