The inscribed bricks are a permanent tribute to men and women who have served in the Armed Forces of the United States.  These lasting tributes are not limited to service in World War II and can encompass any service period.  Placed prominently on the Memorial grounds, they will be viewed by thousands of visitors each year.  The placement of each brick is not only an investment in the legacy of a loved one but also an investment in the future of the Memorial.  Proceeds from the brick campaign will assist the Foundation in maintaining the Memorial for many years to come.  At a cost of $250 each, the bricks are an affordable way to give permanent veteran recognition at the National D-Day Memorial.

Gold Star Garden bricks are reserved ONLY for the remembrance of individuals who lost their lives in service to United States in one of the following ways:

-During World War I, World War II, or during any subsequent period of armed hostilities in which the United States was engaged before July 1, 1958 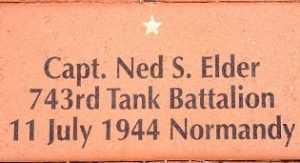 Please carefully and accurately print your information on the form and return it to the Foundation.  Bricks dedications are held twice a year, on Memorial Day and Veterans Day.  Please order soon to reserve a space for the next installment.  Due to logistical concerns, please allow us to choose the exact location of your brick within the walk.

Brick sponsorships are 100% tax-deductible in accordance with IRS regulations.