You are about to embark on the great crusade toward which we have striven these many months. The eyes of the world are upon you… I have full confidence in your courage, devotion to duty and skill in battle. – Gen. Dwight D. Eisenhower

It is hard to conceive the epic scope of this decisive battle that foreshadowed the end of Hitlers dream of Nazi domination. Overlord was the largest air, land, and sea operation undertaken before or since June 6, 1944. The landing included over 5,000 ships, 11,000 airplanes, and over 150,000 service men.   After years of meticulous planning and seemingly endless training, for the Allied Forces, it all came down to this: The boat ramp goes down, then jump, swim, run, and crawl to the cliffs. Many of the first young men (most not yet 20 years old) entered the surf carrying eighty pounds of equipment. They faced over 200 yards of beach before reaching the first natural feature offering any protection. Blanketed by small-arms fire and bracketed by artillery, they found themselves in hell.  When it was over, the Allied Forces had suffered nearly 10,000 casualties; more than 4,000 were dead. Yet somehow, due to planning and preparation, and due to the valor, fidelity, and sacrifice of the Allied Forces, Fortress Europe had been breached.

What Does D-Day Mean?

The terms D-Day and H-Hour are used for the day and hour on which a combat attack or operation is to be initiated. They designate day and hour for an operation when the actual day and hour have not yet been determined or announced. The letters are derived from the words for which they stand, “D” for the day of the invasion and “H” for the hour the operation actually begins. When used in combination with figures and plus or minus signs, these terms indicate the length of time preceding or following a specific action. Thus, H-3 means 3 hours before H-hour, and D+3 means 3 days after D-day. H+75 minutes means H-hour plus 1 hour and 15 minutes. 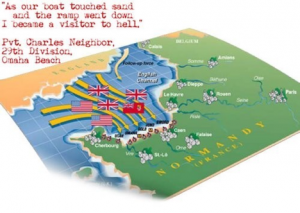 Planning papers for large-scale operations are made up in detail long before, specific dates are set. Phased orders are planned for execution on D-Day or H-Hour minus or plus a certain number of days, hours, or minutes. According to the U.S. Army’s Center of Military History, the earliest known use of these terms is in Field Order Number 9, First Army, American Expeditionary Forces. It is dated September 7, 1918: “The first Army will attack at H hour on D day with the object of forcing the evacuation of the St. Mihiel Salient.” D-Day for the invasion of Normandy was set for June 5, 1944, but it actually occurred on June 6. Therefore, D-Day, as it applies to Overlord, is June 6, 1944.