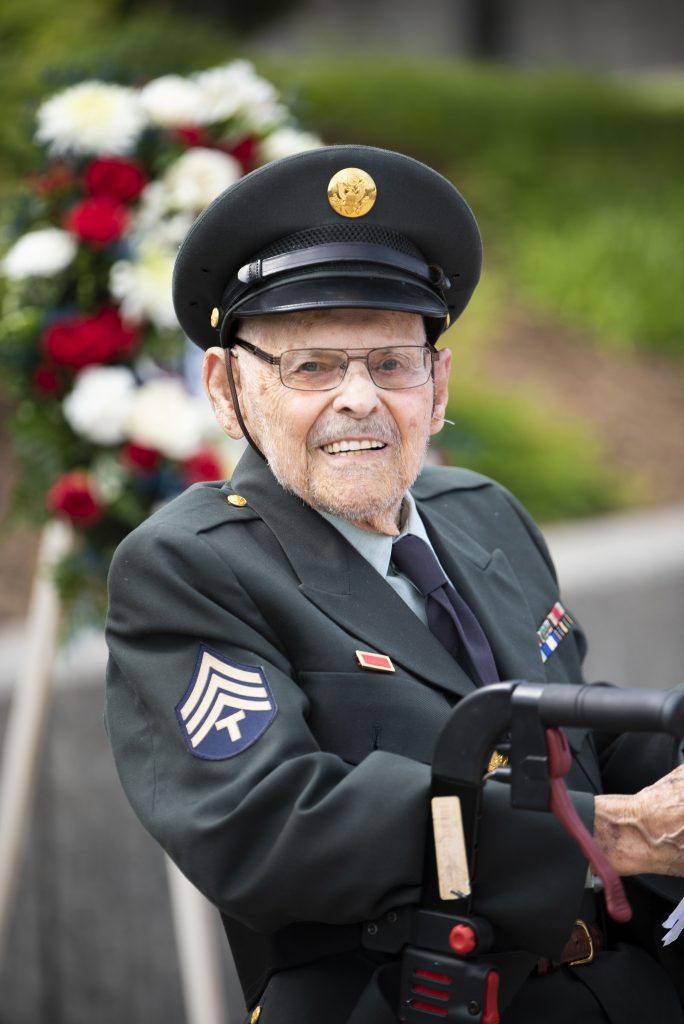 “I have never forgotten those brave soldiers who died so that I could march in safety up that bluff.   That memory is seared into my head to this day.  It became the defining moment of my life’s path and purpose.  It mapped the challenges and opportunities I chose, and still seek, to carry out meaningful service to my country and to humanity.  I hope that my life’s endeavors have thus far adequately fulfilled that promise.”  ~  Ash Rothlein, Normandy Veteran

Ash Rothlein lived his promise, giving back in innumerable ways during his remarkable 97 years.  Sadly, Ash passed away on January 27th – another of the greatest generation leaving us with the task of carrying on what they carried forward through their lives.

Ash Rothlein epitomized the tenets of service and sacrifice.  Shortly after his 20th birthday in June 1944, he found himself on Omaha Beach, a member of the 187th Advanced Army Ordinance Depot Company.  He was greeted by a scene he never forgot.  As he exited his landing craft, the battle had already moved inland, but the carnage, signifying an immense amount of sacrifice, was clearly visible.  “Spread far and wide across the landscape were countless white wooden crosses, marking the spot where thousands before us had fallen,” Ash often said when reflecting on his time in Normandy.  From that moment on, he made a promise to himself.  If he survived the war, he would give back through selfless service to others.

Over the years, Ash was a faithful friend and supporter of the National D-Day Memorial. His vision and determination spearheaded the installation of the sculpture Homage in 2014 for the 70th anniversary of D-Day.  On that date and every year afterward, Ash placed his own French Legion of Honor medal on Homage in tribute to all those who did not return from the war.  Each June 6, he had the crowd repeat after him, “We will never forget.”  The gathering of visitors to the Homage sculpture after each ceremony on D-Day and his unforgettable chant has become an annual tradition at the monument and one the Memorial will continue in the years to come. 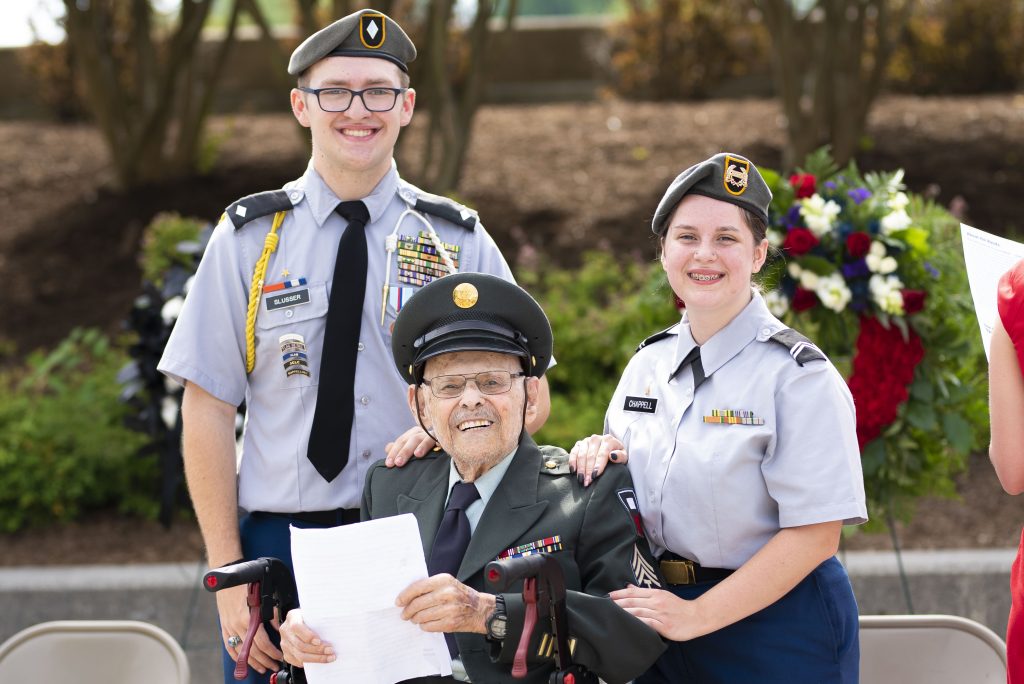 Ash’s legacy does not stop there, however.  In 2017, Ash and his wife, Liz Rothlein, established an endowed scholarship fund that the Memorial uses to provide scholarships to students going to college or to provide funds to several members of the Virginia Tech Corps of Cadets to travel to the beaches of Normandy to learn more about the sacrifices his generation made during World War II.  Ash’s vision for the future has enabled students to reflect on the true spirit of a generation who worked together to save the world while helping them focus on how they too can make the world a better place.

For Ash, the war was an unforgettable experience that shaped how he lived his life,” stated April Cheek-Messier, president of the National D-Day Memorial.  “He would want others to know that the best way to honor his generation is to live a life with meaning and service. He exemplified this in his own.  Ash made it clear that no matter how young or old you might be, you too can make a difference.  It’s a lesson we can all embrace. ” 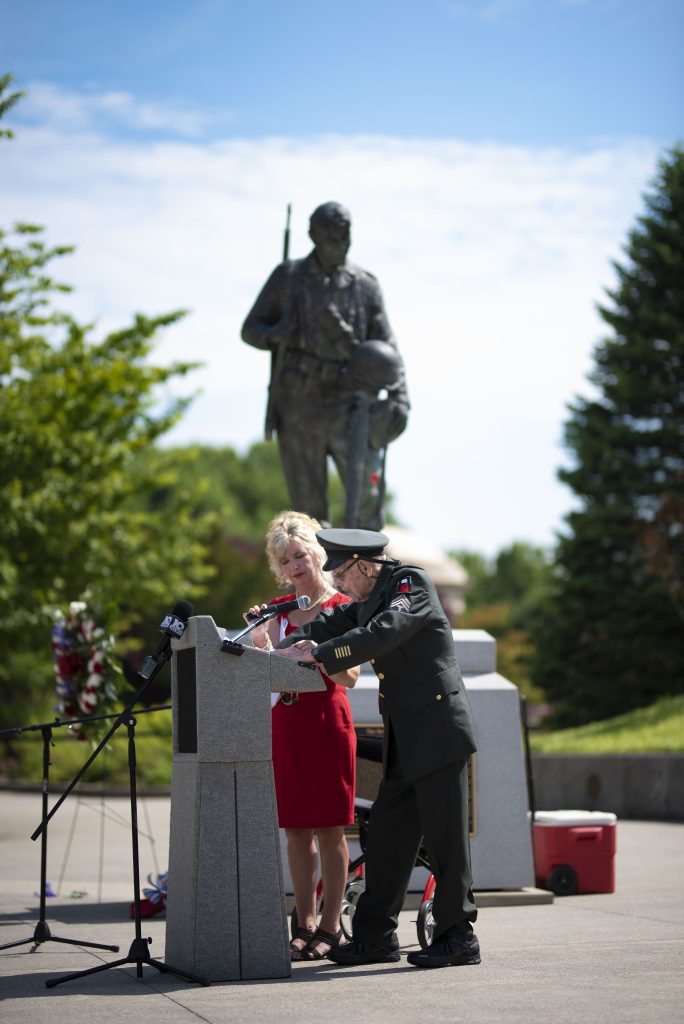 This past June 6th for the 77th anniversary, Ash Rothlein stood at the podium on that hot day, dressed in his WWII uniform with notes in hand.  With a huge smile he remarked, “I’m still that 19-year-old skinny kid who loves his country with heart and soul, fire & spirit as I give you these words today as my annual D-Day tribute to our fallen heroes of the Normandy invasion.”  Shortly thereafter, the crowd chanted, “We will never forget!”

“When I last spoke to Ash,” said Cheek-Messier, “he was hard at work on his remarks – not for the 78th or 79th anniversary but for the 80th when he would turn 100 years old.  We will miss him deeply.  He breathed life into the memory of the veterans who have long since left us.  He has now joined their ranks and it is up to us to carry on his legacy.”

This June 6th, visitors will still assemble around Homage with Ash’s medal hanging from the sculpture he loved.  With the crowd gathered around once more, we will chant with renewed spirit and determination, “We will never forget.”  Ash’s legacy, like those of his comrades, lives on.